Creative Technology Ltd today announced the Sound Blaster Roar Pro -- a powerful compact Bluetooth Speaker made for audio entertainment and professional usage as a wireless personal PA system (public address system) when used with the optional wireless Creative iRoar Mic. The Sound Blaster Roar Pro is the first in the all new professional series of speakers by Creative and comes in exclusive Matte Black. 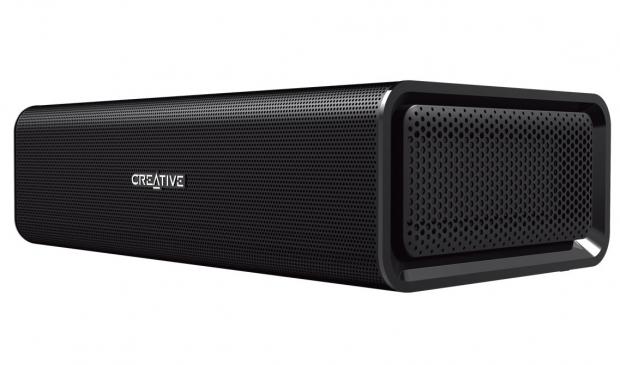 Compared to the Sound Blaster Roar Classic, the Sound Blaster Roar Pro features improved drivers for more refined audio performance, a longer battery-life of up to 10 hours, and a slideswitch that allows users to select different audio profiles (Warm, Neutral, and Energetic). "Creative's all new Roar Professional Series of speakers are designed to deliver powerful audio for personal entertainment on the go, and at the same time, double-up as powerful productivity tools when used to address groups of people at work, in classrooms, or in camps," said Low Long Chye, General Manager of Audio at Creative.

"The Sound Blaster Roar Pro with the iRoar Mic -- and its low latency RapidTalk technology -- set a new benchmark in voice transmission quality and portability where a portable speaker delivers audio quality on par with bulky public address systems that are far bigger."

The speaker retains the award-winning audio performance and speaker architecture of the classic Sound Blaster Roar but with improvement in its audio performance. Like the classic Sound Blaster Roar, the new speaker is engineered to deliver huge room-filling audio from a bookletsized form factor. Although small and compact, this speaker actually features 5 speaker drivers, including a subwoofer: dual lightweight high-frequency 1.5" drivers for projecting far-field highfrequency dispersion, a top-firing subwoofer that pushes bass upwards, plus two side-firing passive radiators to spread the bass out even farther. The Sound Blaster Roar Pro also features 2 high-performance amplifiers -- one dedicated to driving lows and mids, another solely for delivering highs -- producing clear, spacious, well-balanced audio without compromising on the bass. As a result, the Sound Blaster Roar Pro is able to deliver powerful room-filling audio that is not sweet-spot dependant. The Sound Blaster Roar Pro is also extremely stable when playing back audio at maximum volume as the top-firing bass and midlevel driver is laid horizontally with a low centre of gravity to increase stability, while its rigid monocoque endoskeletal chassis reduces individual vibration of internal components.

Works with the iRoar Mic

The main feature that sets Sound Blaster Roar Pro apart from the classic Sound Blaster Roar is that it works with the all-new wireless iRoar Mic to deliver high-quality low-latency room-filling audio when used as a portable public address system. The iRoar Mic can be held, clipped or hung for versatile and convenient speech delivery and performance. It features RapidTalk -- a patent-pending low latency high quality audio wireless technology that enables easy, quick and high performance sound transmission. The iRoar Mic also comes with a line-in jack that allows for music playthrough from a mobile device, giving users low latency Karaoke sessions. A micin jack also provides options to connect to an external dynamic mic or electret condenser.

The Sound Blaster Roar Pro allows users to choose between three audio profiles to suit their listening preferences by simply sliding a switch. The Warm profile is suitable for soothing audio and tube amplifier-like warmth with richness in your instruments, tones and vocals. The Neutral profile delivers a well-balanced audio signature. And the Energetic profile adds brightness, life and width into a music performance. The Sound Blaster Roar Pro also comes packed with a whole host of useful features:

The Sound Blaster Roar Pro features an integrated microSD WMA and MP3 player that allows users to play audio directly from a microSD card, so users do not need to always commit their smartphone to play music. The player even allows users to skip music folders so that they can navigate to their songs faster without having to tediously cycle through all their individual tracks.

With its built-in high quality microphone providing for clear 360Ã,Â° voice pickup, the Sound Blaster Roar Pro is able to take calls when connected to a smartphone via Bluetooth.

The speaker is able to connect wirelessly via Bluetooth, and utilizes the aptX and AAC codecs for the highest quality audio and lowest possible latency. The sound booklet also features the latest Near-Field Communication (NFC) technology, allowing users to quickly and easily connect to Bluetooth devices, requiring only a simple tap from an NFC-enabled smart device to the speaker to pair and establish a connection. Users can also connect two Bluetooth devices to the Sound Blaster Roar Pro simultaneously.

In Bedtime Mode, the Sound Blaster Roar Pro gradually reduces its volume before automatically shutting down. The feature allows users to be gently and gradually lulled to sleep, and at the same time preserves the speaker's battery by turning it off after a predetermined time, instead of leaving it switched on for the whole night. Parents of young children would also appreciate the feature -- they can record themselves reading out a bedtime story, and play the recording back to their children as they are falling asleep.

The Sound Blaster Roar Pro is not just a wireless speaker for smart devices. Users can connect it to their PCs or Macs via USB to enjoy clear digital audio for their desktops or laptops. Connecting the speaker via USB enables advanced PC audio processing via the downloadable software, Sound Blaster Control Panel, and full access to the SBX Pro Studio suite of technologies that intelligently enhance audio in real-time.

The Sound Blaster Roar Pro also features a Dual-Purpose Battery. The large, built-in 6000 mAh Lithium-Ion rechargeable battery can be used to charge smartphones and tablets, beyond providing up to 10 hours of audio playback.