All NewsBusiness, Financial & LegalCases, Cooling & PSUContests & GiveawaysCPU, APU & ChipsetsDealsDisplays & ProjectorsGamingMotherboardsScience, Space & RoboticsStorageVideo CardsVirtual & Augmented Reality
All ReviewsAll ArticlesAudio, Sound & SpeakersCases, Cooling & PSUCPUs, Chipsets & SoCsComputer SystemsDisplays & ProjectorsGamingMotherboardsNetworkingPeripheralsStorageVideo Cards
GuidesGamingAsk the ExpertsNewsletterAboutForums
Windows 11Halo InfiniteBattlefield 2042Elon MuskGTA 6RTX 3080HDMI 2.1Bitcoin Mining
TRENDING NOW: Largest known comet ever discovered, and we will be able to see it
Video Cards
Since the release of NVIDIA's 9800GX2 a couple weeks back, we've not seen anything too exciting in the way of vendors sprucing up the card over the reference design. I guess many felt it wasn't necessary to as the card boasts some pretty mean characteristics as it stands.

EVGA however have just come forth with a super duper offering they call the 9800GX2 SSC; this card's 1024MB of memory is set to run at 2100MHz with the GPU and 256 Stream Processors operating at 675MHz and 1674MHz respectively. 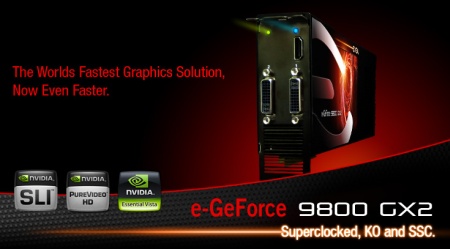 Slightly lower in its chain of modified GX2 offerings is the KO model with GPU, shader and memory clocks of 650, 1620 and 2050 MHz, followed by the SC variant running with memory speeds of 2000MHz (same as the reference cards out there), but with GPU and shader clocks upped to 625MHz and 1562MHz.

You can learn more about each of the cards at the official product page on EVGA's website.

EVGA is now introducing an update to the fastest graphics solution, the EVGA 9800GX2 Superclocked, KO and SSC. Up to 86.4 Billion/sec Texture Fill Rate on the SSC Model gives you the ultimate in extreme performance. 100% testing ensures the highest level of performance and stability possible. This same level of testing and quality allowed Vince "k|ngp|n" Lucido to hit nearly 30,000 points with a single EVGA 9800GX2. EVGA makes the GX2 even more extreme giving you the ultimate in high-definition gaming performance.