The poll from the Tesla CEO comes after he announced that several banned Twitter accounts were coming back to the platform, including Kathie Griffin, Jordan Peterson, and the satire account Babylon Bee. While Musk didn't mention in his announcement tweet that it wasn't his choice to bring back these specific accounts, the SpaceX CEO has previously stated that all account reinstatements would be handled by the new Twitter Council, which he has said consists of a group of individuals with vast viewpoints.

If Musk's previous statements on establishing a Twitter Council remain true, then we can assume that the Twitter owner wasn't the sole decider in reinstating the aforementioned banned accounts. Additionally, Musk asked what "should Twitter do next?", which sparked a reply from one individual that said the company should reinstate Alex Jones' account. Musk swiftly replied with a solid "No." 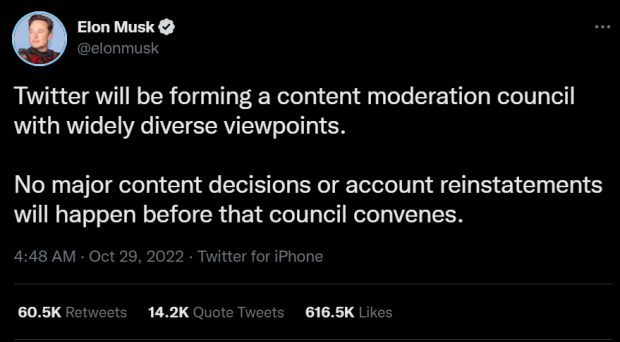 Now, Musk has taken to his personal Twitter account to ask if former President Donald Trump's Twitter account should be reinstated. Musk replied to his own poll by writing, "Vox Populi, Vox Dei", which is a Latin phrase that literally means "voice of the people", or in English, "the opinion of the majority of the people". The poll has 23 hours left at the time of writing, and it's unclear how its results will dictate the decision of the new Twitter Council, or if the Twitter Council will be used at all.