Call of Duty Modern Warfare 2 could end up being the best-earning Call of Duty of all time, and has already broken new records for the franchise. 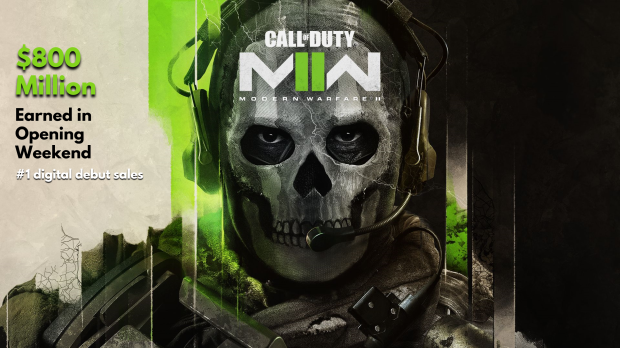 Today Activision-Blizzard confirmed that Modern Warfare 2 has generated an incredible $800 million in revenues, which will supercharge the company's full-year earnings. Modern Warfare 2 has set a new record for the best opening weekend in digital sales out of any other Call of Duty game.

Activision touts that Modern Warfare 2 beats the combined openings of Top Gun: Maverick and Doctor Strange in the Multiverse of Madness.

Comparing this to Modern Warfare 2 will have to do a lot of heavy lifting to push Activision segment earnings even higher in order to beat last year's record of $3.478 billion revenues. The first two quarters have been lackluster for Activision, with Q1 making $453 million (down nearly 50% year-over-year) and Q2 earning $490 million (down nearly 38%).

Activision's Call of Duty: Modern Warfare II has become the #1 top-selling opening weekend ever in the franchise, delivering more than $800 million worldwide in sell-through following the first three days from its release on October 28, 2022. The blockbuster opening tops any of the biggest worldwide box office openings of 2022, surpassing 'Top Gun: Maverick,' and 'Doctor Strange in the Multiverse of Madness' worldwide box office openings combined.