German automaker Sono Motors will bring its Sion solar electric vehicle to the United States and recently completed a multi-city coast-to-coast US tour. The car had press stops in New York City, Boston, Detroit, San Francisco, San Jose, and Los Angeles - with Sono aiming to stir up interest in the US auto market. 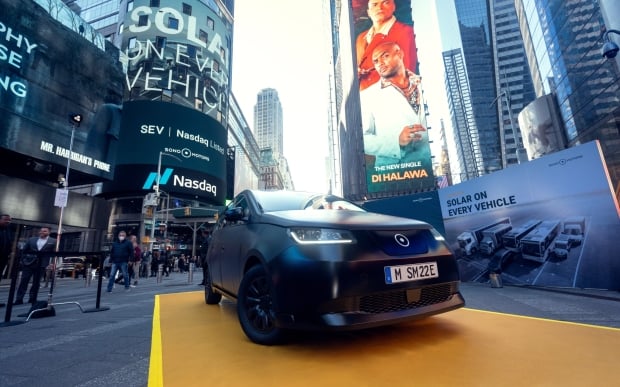 The total range should provide 190 miles on a full charge, with solar power helping contribute around 5,400 miles per year - so drivers can expect around 10-15 miles per day of solar-powered driving. Of course, that's an average number daily, weather, parking location, and other factors could impact solar power generation.

The outer shell of the car has 456 solar half-cells and EV power is generated by a 54 kWh LFP battery. Almost 190 miles of range can be charged in a half hour using a Level 2 DC fast charger.

Here is what Laurin Hahn, co-founder and CEO of Sono Motors, had to say at a press event earlier this month:

"Solar electric vehicles represent a new frontier in zero-emission mobility, enabling convenience, more range on a single charge, and greater independence from charging infrastructure. We are tremendously excited to bring Sion to the United States for the first time and to showcase our vision of the future of solar transportation."

Sion will be released in Q3/Q4 2023 in Europe, with more than 42,000 reservations and pre-orders already recorded, according to Sono. The car doesn't qualify for a US federal tax credit since it's assembled overseas, but it still is one of the cheaper ways to jump into the current EV market.

Truthfully, it's been hard enough for automakers to convince drivers to adopt EVs - even though sales are increasing - so a solar EV might be a bit of a stretch at the moment. However, a lower customer price point and the ability to charge at home might be enough to entice some drivers to roll the dice.