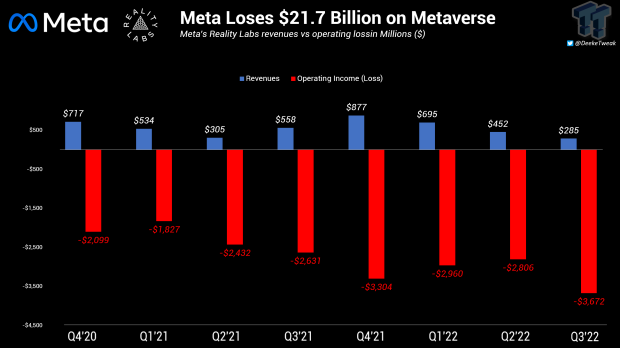 The metaverse has been under close scrutiny by investors and the media due to its lack of widespread adoption and consumer appeal. Meta shows no signs of slowing down its megaton investment into the fledgling platform, which it hopes to pioneer in order to significantly boost its advertising presence across a new medium. Since Q4 2020, Meta has lost over $21.7 billion on its bet on the metaverse.

As far as revenues go, Reality Labs generated a current low of $285 million in Q3--the lowest quarter since Q4 2020. The metaverse/VR division made only 1% of the company's total revenues and accounted for 17.9% of its expenses during the quarter.

Metaverse loses are expected to "grow significantly" throughout the 2023 calendar year, too:

"Reality Labs expenses are included in our total expense guidance. We do anticipate that Reality Labs operating losses in 2023 will grow significantly year-over-year. Beyond 2023, we expect to pace Reality Labs investments such that we can achieve our goal of growing overall company operating income in the long run."