NASA has taken to its blog and social channels to showcase Herbig-Haro objects known as HH1 and HH2, located 1,250 light years away from Earth.

Both of these objects reside in the constellation Orion, and according to NASA, the luminous cloud above the bright star in the upper right-hand corner of the image is HH 1, and HH 2 is the cloud in the bottom left-hand corner. These stellar nurseries are the birthplace of new stars and were created by a star system that is located directly in the center of the image. Unfortunately, the star system is shrouded in thick clouds of dust, hence the black center.

Notably, Herbig-Haro objects are simply glowing clumps that are found around newborn stars, and they form when new stars hurl jets of gas outwards at incredibly high speeds. This hurled gas then collides with the surrounding gas and dust, forming the clumps seen in the above image. Additionally, NASA writes that Hubble observations have revealed that some parts of HH 1 are moving at extremely high speeds, with some observations showing that parts of the stellar nursery are traveling at 248 miles per second, or 892,800 miles per hour. 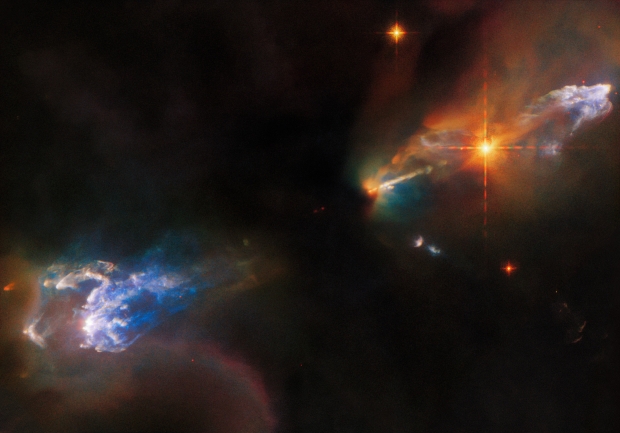 Hubble has been used to capture these stellar nurseries for a variety of reasons. Firstly, the famous telescope used its Wide Field Camera 3 to observe HH 1/2 in infrared, visible, and ultraviolet wavelengths. The results from those observations will be used by two groups of astronomers, with one group looking into the specific structure/motion of the Herbig-Haro objects, and from that study, researchers should be able to develop a better understanding of the processes that occur when a star releases an outflow of gas that collides with surrounding gas and dust.

The second group of astronomers will use the observations of outflows of gas from these newborn stars to lay the foundational data for follow-up observations with NASA's James Webb Space Telescope. Since Webb's highly advanced instruments are capable of peering through cosmic dust that is so regularly shrouding young stars, NASA's next-generation telescope will be to provide revolutionary data on the newborn stars and their processes.