The new Witcher saga is a trilogy of games that will all release in less than a decade, CD Projekt RED has officially announced. 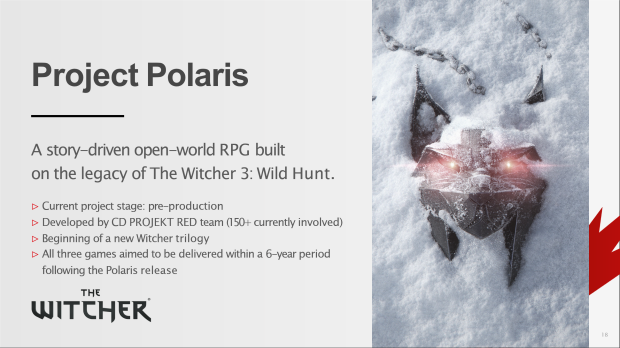 Fans will not have to wait long for next Witcher game. CD Projekt today confirmed that its new Witcher saga, which is codenamed Polaris, will consist of three games set in a AAA RPG trilogy, and that the entire saga will be released in six years. This is a massive acceleration for CD Projekt, who typically releases one big AAA game every 4-5 years.

The Polaris saga will be developed using Unreal Engine 5 as part of a multi-year partnership agreement with Epic Games, and is being developed by over 150 people. The saga is in pre-production and should incorporate multiplayer in some way, which will be the first time any Witcher game has had online content. CD Projekt promises that multiplayer will be designed to "enrich the singleplayer experience."

"Another announced project, Polaris, marks the launch of a new Witcher saga. The saga will consist of three games, which CD PROJEKT RED intends to publish in a six-year period starting with the release of Polaris. The second and third installment will rely on the technological foundation put in place for Polaris, which should streamline development and enable the Studio to focus on achieving its creative vision," CD Projekt said in internal documents.

"Polaris is a codename for the next installment in The Witcher series of games, which we recently announced was in pre-production. It is the beginning of a new saga: we aim to release two more Witcher games after Polaris, creating a new AAA RPG trilogy," CD Projekt said on Twitter.