The US Defense Innovation Unit and jet ski manufacturer T3MP3ST are working together to look for ways to make electric jet skis a suitable tool for elite military units. One day, it's possible the T3MP3ST could be fully autonomous drones that can be used without human operators for specific missions.

Jet skis might be fun to ride but haven't been suitable for military use because they simply aren't very efficient. In addition to producing "200 times the emissions of a single car," according to Nico Sell, CEO of T3MP3ST, in a statement published by Defense One, the gas-guzzling jet skis also create a logistical nightmare: "If you have gas, then you have guards. And you have mechanics. So we can get rid of all of those logistics."

The T3MP3ST Maverick GT Ski can be equipped with radar, sonar, cameras or lidar, along with autonomous functioning using GPS waypoints. The base model of the Maverick GT is $150,000, and the full RIB package is $500,000 - featuring a 350-horsepower 3D-printed electric engine that provides a top speed of more than 70 mph. Its electric range is 50 to 100 miles, and can navigate surf up to 100 feet high, developers claim.

Defense Innovation Unit representatives said the priority will be electric search and rescue, though could be expanded to resupply missions. Testing will begin in California in early 2023, then researchers will decide when it's time to start working towards full autonomy.

The US military wants to boost the country's industry and achieve operational advantages, which is why the Defense Department is dedicated towards the electrification of vehicles. Moving from internal combustion engines to electric reduces maintenance costs, saves fuel cost, and eases logistics in the military's often large fleet of vehicles. 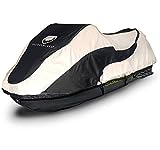