NASA has released the first images of Mars taken by its new James Webb Space Telescope (JWST), and the observations are already providing valuable insight into Earth's neighbor. 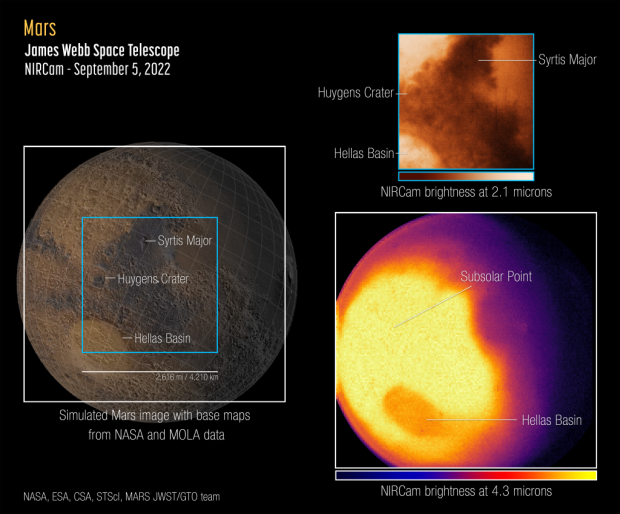 NASA has taken to its blog to release the images snapped by Webb and explains that the observatory, which is positioned just a million miles away from Mars, took the images of the side of the Red Planet that was lit by the Sun and facing the telescope. The images were taken on September 5, and according to NASA scientists, there was a challenge to even "see" Mars with Webb since the new observatory is designed to observe objects that are extremely faint and far away.

After some tweaking the with the exposure of Webb's infrared camera and analysis of the received data, researchers were able to observe the entire planet and capture images and spectra that astronomers will use to study patterns, Martian weather, and seasons. The first image released by NASA showcases an area of Mars called the Huygens Crater, a near 280-mile-wide that's located in the Syrtis Major Planum. The image outlines that Webb's NIRCam was used to determine the temperature of the surface and atmosphere by measuring the amount of light that is given off by the planet as it loses heat.

Webb's observations don't stop there, as the observatory is also capable of measuring the chemical composition of atmospheres by analyzing the spectrum of light that it detects from its target planet. This method of observation is called spectroscopy, which measures how light is absorbed and emitted differently by individual chemical elements. By measuring the differences, researchers are able to determine the chemical composition of an atmosphere and its Mars' instance, Webb was able to detect the presence of water, carbon dioxide, carbon monoxide, and more.

NASA writes in its blog preliminary analysis of the spectrum is already providing insights into the dust, icy clouds, and the different types of rocks that are present on the Martian surface. Additionally, the space agency writes that researchers are currently preparing a paper that will explore these observations and that it will be submitted to a scientific journal for peer review soon.