Intel seems to be addressing rumors that its future-gen Arc desktop GPUs have been nixxed with a few tweets from ex-RTG boss over at competitor AMD, Raja Koduri.

Raja posted a new picture after the story broke that the "decision had been made" to cancel the Intel Arc desktop GPUs and that we might not even get to see Arc "Celestial" launch. Intel hasn't got its Arc "Alchemist" GPU to market yet, while Arc "Battlemage" drops next year... it seems that Battlemage is going to be a single low-end or mid-range die versus an exciting new multi-die GPU.

The picture that Raja posted was of the Intel Arc A770 Limited Edition graphics card that he "bumped into" at the Toronto volume validation lab, adding that the GPU is still "getting ready for launch".

But in reply to that tweet, "GTechGeorge" asked about the recent rumors of Intel bringing the axe down on Intel Arc after the first two generations. This is where things get a little interesting, where Raja replied with: "we are 🤷‍♂️ about these rumors as well. They don't help the team working hard to bring these to market, they don't help the pc graphics community..one must wonder, who do they help?..we are still in first gen and yes we had more obstacles than planned to ovecome, but we persisted...".

Gamer Meld responded, clarifying the rumors -- from Moore's Law is Dead and as I reported yesterday -- tweeting "the rumor looks to be about next-gen or possibly the generation after. No one claimed that Alchemist was cancelled. Do you have a comment on future architecture and Intel's commitment to them?" 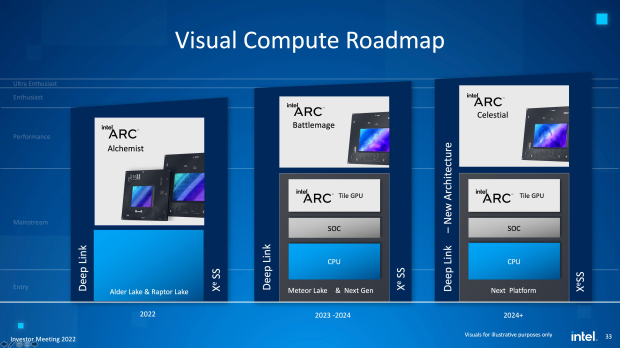 Raja responded, referring to an attached Visual Compute Roadmap for Arc leading from 2022 to 2024, starting with Arc Alchemist, followed by Arc Battlemage.

My question: there's no clear distinction on "DISCRETE GRAPHICS CARDS" -- to make it even clearer... a competitor (from Intel) to AMD and its Radeon RX 7000 series GRAPHICS CARDS and NVIDIA with its GeForce RTX 40 series GRAPHICS CARDS. Not a GPU Tile on a CPU like Meteor Lake, and other Intel CPUs and APUs... I'm talking about a discrete graphics card that plugs into a PCIe x16 slot (be it PCIe 4.0 or PCIe 5.0).

We might see Intel's GPU business still sold off out of nowhere, just like the company did to its Optane team out of nowhere, even after the Optane team was showing off next-gen products that it was working on in the months prior. Intel's GPU business could be business-as-usual with Arc Alchemist, and maybe into Battlemage, but if MILD's sources are correct, then the stars might not align for Celestial to make it into a discrete GRAPHICS CARD (once again, for emphasis).