NVIDIA is giving away a free copy of Marvel's Spider-Man Remastered with any purchase of a new GeForce RTX 30 series graphics card, desktop, or laptop. 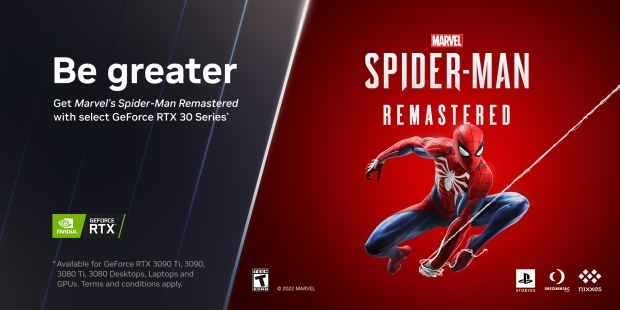 Get a free copy of Marvel's Spider-Man Remastered!

The new promotion will apply to NVIDIA's fleet of high-end Ampere-based GeForce RTX 30 series GPUs as we've been reporting from leaks that NVIDIA is working with AIB partners and other companies (like game developers, publishers, etc) on incentivizing the sales of their RTX 30 series GPU stock.

If you're in the US, the new NVIDIA promotion will go through major retailer and e-tailer partners, as well as platform partners that sell pre-built and custom gaming PCs. You'll have between September 7 and October 12 to buy the select GeForce RTX 3080, 3080 Ti, 3090, and 3090 Ti desktops, laptops, or GPUs for the free digital copy of Marvel's Spider-Man Remastered.

NVIDIA also wrote about the RT Cores inside of the GeForce RTX 30 series GPUs and the power to run the beautiful ray-traced reflections in Marvel's Spider-Man Remastered at their highest level. Not only that, but the game features NVIDIA DLSS support so you're covered for performance boosts thanks to NVIDIA's awesome AI upscaling technology (and its latest variant in DLSS 2.4).