Call of Duty will eventually be removed and kept off of PlayStation systems, Sony gaming boss Jim Ryan has officially confirmed today. 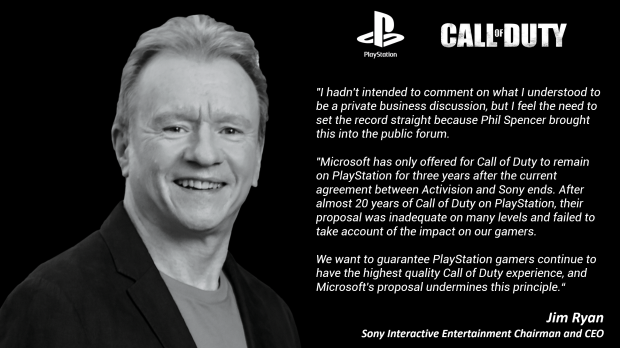 Call of Duty will not remain on PlayStation after all. Following multiple nebulous statements with lots of PR speak from Microsoft and Xbox's Phil Spencer (and a non-answer to Bloomberg regarding the topic of exclusivity), Sony has officially responded and outlined the terms of the Microsoft's proposed non-exclusivity deal.

"I hadn't intended to comment on what I understood to be a private business discussion, but I feel the need to set the record straight because Phil Spencer brought this into the public forum," Sony Interactive Entertainment CEO Jim Ryan told GamesIndustry.biz.

"Microsoft has only offered for Call of Duty to remain on PlayStation for three years after the current agreement between Activision and Sony ends. After almost 20 years of Call of Duty on PlayStation, their proposal was inadequate on many levels and failed to take account of the impact on our gamers.

"We want to guarantee PlayStation gamers continue to have the highest quality Call of Duty experience, and Microsoft's proposal undermines this principle."

Xbox's Phil Spencer had previously told The Verge that Call of Duty would remain on PlayStation for "several years" after the pre-existing contracts between Sony and Activision have expired.

"In January, we provided a signed agreement to Sony to guarantee Call of Duty on PlayStation, with feature and content parity, for at least several more years beyond the current Sony contract, an offer that goes well beyond typical gaming industry agreements," 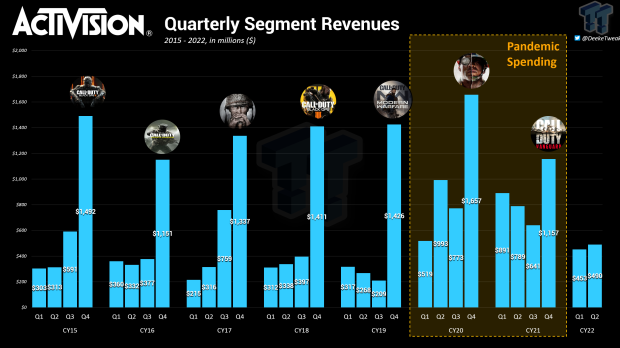 Call of Duty is currently unrivaled in the games industry due to its monstrous presence across retail and live service channels. No other video game on the market commands the same kind of revenues and recognition that Call of Duty has. While games like Apex Legends and Fortnite do compete, the grounds aren't event considering these are F2P-only titles and Call of Duty delivers premium games every year. 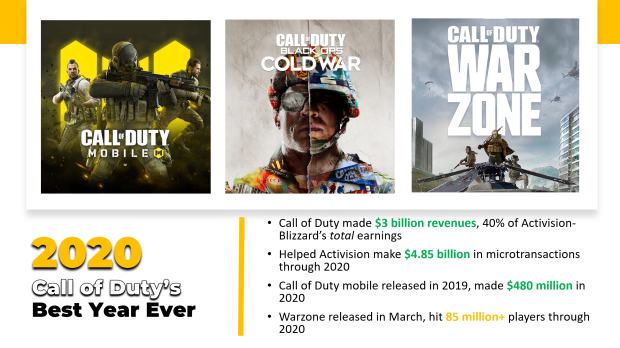 Call of Duty made more money in 2020 than any other period in history, generating $3 billion revenues, or nearly half of GTA V's currently reported lifetime revenues, in one year.

The $30 billion series is one of the most popular video game franchises of all time, and sells tens of millions of copies of games every year while raking in billions of dollars in revenues from digital online channels, including microtransactions across games like its mainline multiplayer modes in annualized franchise releases, and its free-to-play Call of Duty Warzone and Call of Duty Mobile games.

This year marks a massive expansion point for Call of Duty with Modern Warfare II arriving in October, and a new separate Warzone releasing sometime in 2023. 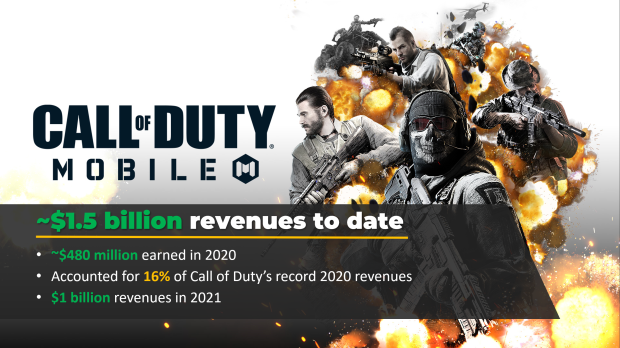 Call of Duty Mobile has generated over $1.5 billion revenues as of 2021. More COD mobile games are planned, including a mobile release of Warzone.

Call of Duty has been a major concern for Microsoft's proposed $68.7 billion buyout of Activision-Blizzard. Worldwide regulators are currently scrutinizing the merger and Microsoft's intentions with Call of Duty are seen as potentially anti-competitive due to exclusivity concerns.

The UK's Competition and Markets Authority (the CMA, basically the UK's version of the FTC) has publicly aired its concerns on Microsoft's proposed buyout of Activision-Blizzard. The CMA says it believes the deal has a "realistic prospect of significant lessening of competition" due to Microsoft's existing technologies, services, and regarding any kind of exclusion with Call of Duty.

Jim Ryan has confirmed that Call of Duty will indeed become Xbox-and-PC exclusive and kept off of PlayStation. One of the world's most powerful and lucrative video game series is on a countdown timer on gaming's largest console platform. 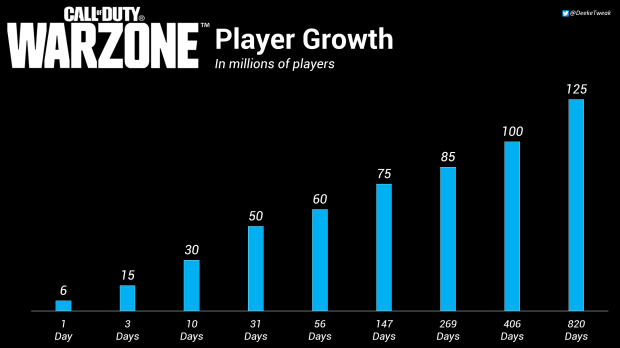 Warzone's significant player growth has materially contributed to Activision's yearly revenues. In 2021, Activision made a record-breaking $8.8 billion in revenues.