One talented modder has added Michaelangelo, Leonardo, Donatello, and Raphael into Insomniac's new Spider-Man PC game, showing us what a new TMNT should look like. 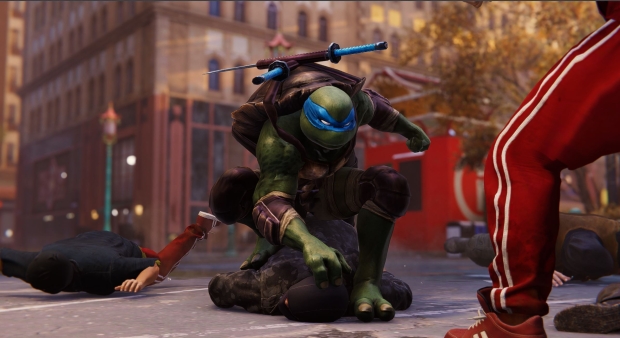 Modder Chase aka Space_Dasher has done what hasn't been accomplished in 6 years: Effectively helped create a new TMNT game using custom skins. It's not a new game exactly...but the totally tubular turtles really do add a new layer of depth to the game.

The famous shell-shockers have been added into Insomniac's new Spider-Man game as a downloadable PC mod, effectively transforming Peter Parker's adventure into a highly acrobatic ninja romp befit of the old Eastman and Laird comics. It might sound weird to see Leonardo sling on webs and tie up enemies using spider-silk, but it's actually surprisingly fitting. It's kind of like the 90s crossover that we've always wanted--maybe in some alternate dimension the turtles got soaked in TGRI mutagen and bitten by a radioactive spider...

Paramount recently confirmed that a new AAA Teenage Mutant Ninja Turtles game is coming in 2023. With any luck it'll be even just a little bit like this mod.

This mod brings the Teenage Mutant Ninja Turtles as PLAYABLE CHARACTERS within MARVEL'S Spider-Man REMASTERED! Play as Leonardo, Raphael, Donatello or Michelangelo as they fight crime, villainy and most important of all - pizza outages, through Marvel's New York!

Beyond the base files are included are several alternatives meant for Donatello and Michelangelo, each of them containing different accessories and display options!