Intel's entry-level Arc A380 desktop graphics card has reached the hands of an overclocker, who has pushed it above 3.0GHz, but the overclocker said that the experience and process were far more complicated than it should be.

SkatterBencher secured an Intel Arc A380 graphics card from a Chinese website and has been playing with it ever since: the first problem that he ran into was that the official Arc Control software is the one and only overclocking tool to push the Arc GPUs. But it was so bad that the overclocker had to analyze driver code to see what the click OC percentage slide actually does: that's when he discovered that there is a limit of 2450MHz for the default Voltage-Frequency curve.

Intel has two overclocking modes on its Arc discrete GPUs: offset mode and lock mode. Offset mode increases the maximum frequency with higher voltage, similar to NVIDIA, while the lock mode provides you with the ability to adjust voltage and frequency manually, where you can push up and above the maximum 2450MHz GPU frequency. 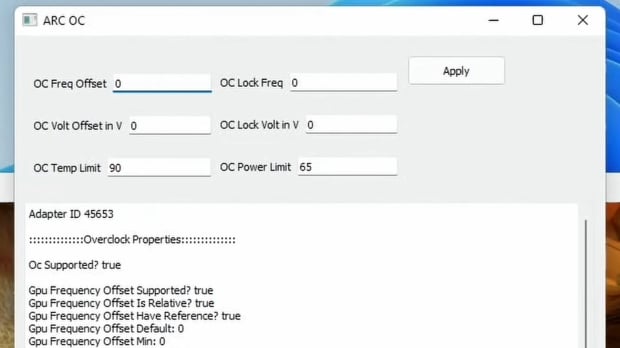 Inside Intel's official Arc Control software, there's a built-in option called "GPU Performance Boost" that's a percentage slider that doesn't scale the way it should. The reason? Pushing the slider up by 30% only results in the GPU clocks going up to 2696MHz, which is a 10% increase. The GPU Voltage slider doesn't work at all, while no memory overclocking tools are available to drive up the GDDR6 memory on the Intel Arc A380 graphics card.

Once that wall was reached, that's when SkatterBencher and Shamino created their own tool (which the duo hasn't made available to the public, yet). Their custom software can override the settings, boosting the GPU clocks and voltages to much higher levels.

At one point during overclocking the Intel Arc A380 graphics card, SkatterBencher boosted the GPU voltage up to a huge 2V... and yet the card survived. Surprisingly. 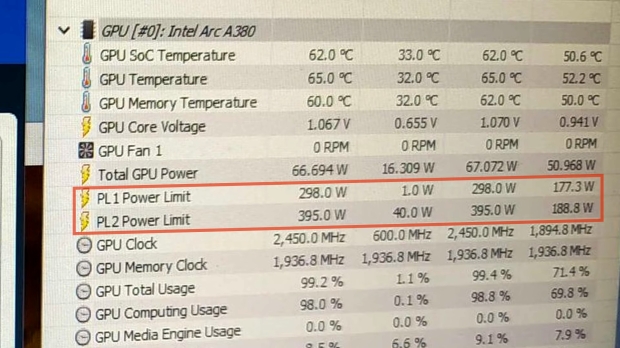 Intel's current Arc A380 GPU has PL1/PL2 limit by default is 65.5W, but they can be boosted through the Arc Control software panel to 97.5W... but not on the custom tools that SkatterBencher and Shamino created: the PL1 power limit can be boosted to 298W, while PL2 power limits can be pushed up to an insane 395W.

SkatterBencher notes that the PL4 limit is the real star here, where the PL4 limit is built into the drivers... and is set to 800W. This was the thing that prevented the overclocker from pushing the Intel Arc A380 to 3.1GHz and finishing his benchmarking... once the power limit is reached, the GPU clock speed plummets down to 2.3GHz... so even if the GPU reaches that overclocked GPU frequency, it's not going to stay there long.

The overclocker says that he's looking at options of modifying the PL4 limit, but hasn't had any success so far. We should expect those limits to be broken in the near future, though. 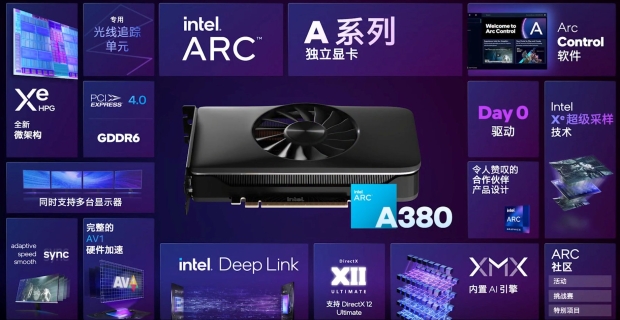 When it comes to display connectivity, the new Intel Arc A380 is pretty awesome: 3 x DisplayPort 2.0 (yeah, not DisplayPort 1.4 connectors) and 1 x HDMI 2.0b connector. Intel does provide AIB partners with the ability to add PCONs (Proton Converters) to their Arc GPUs, which enables HDMI 2.1 support.