Intel's entry-level Arc A380 graphics card is kinda out in the wild, where it's available in China and coming to PCs in the US inside of pre-made systems... but now the Arc A380 has been tested with the gold standard of PC gaming over a decade ago: Crysis.

Crysis was one of the very best-looking games when it was released, and hell... it still is. It looked better than most flagship AAA games on either of the consoles at the time, and for many years after Crysis was released. In the new Intel Arc A380 graphics card benchmarked with Crysis, it's using the DX10 API, 1080p resolution, Very High preset and 4x MSAA enabled for 60FPS+ without an issue.

PCGamesHardware benched the GUNNIR Intel Arc A380 Photon OC in Crysis during the "Paradise Lost" level once you jump out of the Ceph mothership. During this part of the game, the Intel Arc A380 was running Crysis at 60-70FPS and was even breaching 80FPS+ without a problem. No frame stuttering here, which is a good thing to report for the Intel Arc A380.

PCGH also notes that they didn't have any issues running Crysis in DX10, and will soon have numbers on the performance against AMD's lowest-end RDNA2-based Radeon RX 6400 graphics card. 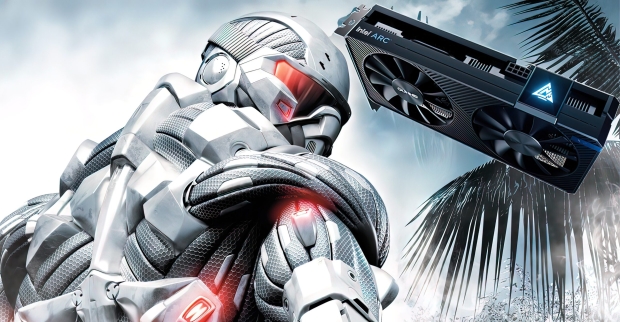 GUNNIR's new custom Arc A380 Photon graphics card has the usual display connectivity: 3 x DisplayPort and 1 x HDMI 2.0 connector... note the lack of HDMI 2.1 connectivity here. It's a lower-end card, but lower-end cards get used in HTPC systems all the time... you wouldn't want to buy this and hook it into your new 4K 120Hz-capable HDMI 2.1-based TV