The mystery that is Intel's GPU marketing plan continues, where it seems that the company is playing around with the desktop Arc A580 graphics card with the first benchmark showing up. 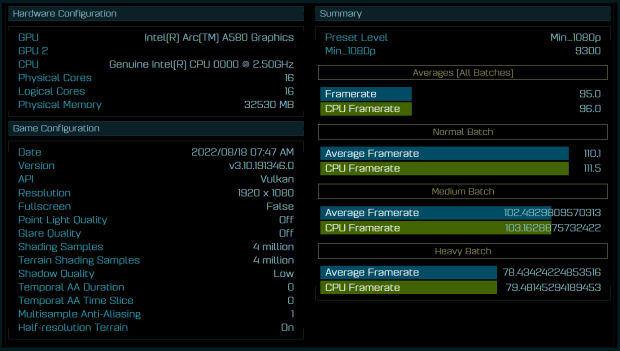 As for the benchmark run, the Intel Arc A580 desktop graphics card was run with an Intel engineering sample CPU that rocks 16 cores, meaning it could be the new 13th Gen Core "Raptor Lake" CPU, or something else entirely. I'm sure it would be a new Raptor Lake CPU + Arc A580 graphics card and ran Ashes of the Singularity (in the Vulkan API, not DirectX 12) at 1080p on the Minimum graphics preset: 9300 points and 95FPS average.

Ashes of the Singularity was one of the very first games that supported DirectX 12, and has been pretty useless other than turning up in random benchmark runs (because no one really plays it). Intel has been playing with the Vulkan API side of things, where if it's pegged against NVIDIA's mid-range GeForce RTX 3060, the scores are very close.