California-based company Samson Sky has been developing its Samson Switchblade for 14 years.

The Switchblade has now passed the Federal Aviation Administration (FAA) inspection requirements to be classified as an Experimental Category aircraft. As such, the Switchblade has begun flight testing to see how the vehicle performs in the air. The Switchblade can fly up to 200 miles (322 kilometers) per hour after switching from its street-legal, three-wheeled car form to aircraft mode by deploying its wings.

The wings are folded beneath the two-seat cabin, and the tail is also stowed away at the back of the vehicle, ready to deploy alongside the wings when a button inside the cabin is pressed. Transforming into its aircraft form takes under three minutes, but this has yet to be performed on a real, full-scale prototype. Despite this, the Switchblade already has 1,670 reservations and will have an estimated starting price of $150,000.

In its grounded mode, the vehicle is akin to an electric trike, powered by a 1.6-liter three-cylinder engine that takes at least 91-octane gas to produce electricity, which then powers electric wheels to drive with or a propulsion motor for flight mode. Its wheel configuration means it can be registered as a motorcycle in many areas, and in this mode, it can go faster than 125 miles (201 kilometers) per hour.

For more information on the Switchblade, check out this story here. 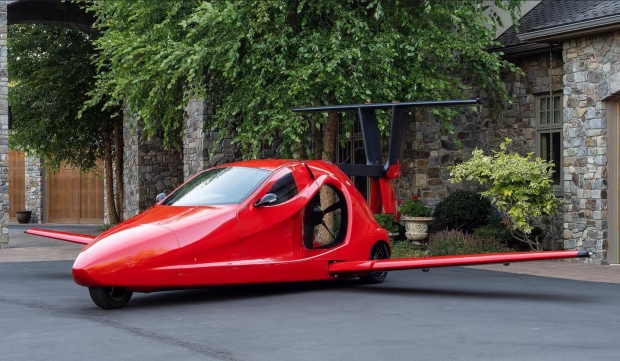