The robot dog featured appears to be the Unitree Yushu Technology Dog, which can be bought on AliExpress for around $3,000. Boston Dynamics has made it clear they won't sell their robots to people interested in using them as weapons. Hence, people appear to have turned to cheaper imitations for experimentation. Footage of the armed robot first appeared on the YouTube account of Alexander Atamov on March 22nd, 2022, which he has appropriately named "Skynet."

Atamov lives in Moscow, Russia, and the dog has had a Russian flag and wolf's head attached to its sides using Velcro. The gun strapped to its back appear the be the Russian PP-19 Vityaz, a submachine gun derived from the AK-74. Atamov is not the first person to equip such robots with weapons; defense contractor Ghost Robotics showed off a robotic dog of its own equipped with a weapon akin to a sniper rifle late last year. 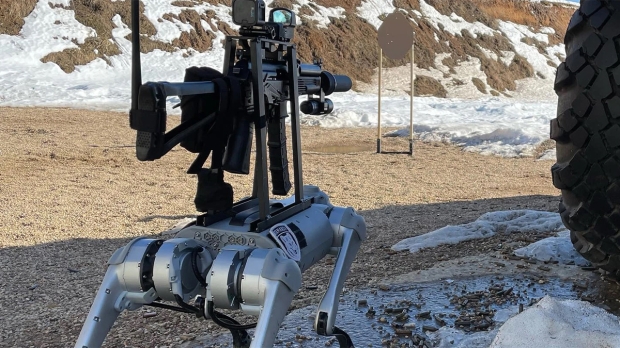