Elon Musk is on a tweet spree right now, with some comments made about President Trump and his recent comments on Musk being a "BS artist" at a rally in Alaska over the weekend.

The SpaceX and Tesla CEO has Breitbart's tweet of Trump ripping into Elon Musk calling him "another bullsh*t artist" pinned to the top of his Twitter, replying to the tweet an hour ago saying: "I don't hate the man, but it's time for Trump to hang up his hat & sail into the sunset. Dems should also call off the attack - don't make it so that Trump's only way to survive is to regain the Presidency".

Adam Irvin replied, saying: "Hmm. I'm a little surprised this is your take. I say Trump/DeSantis 2024 DeSantis 2028/2032" to which Musk replied: "Trump would be 82 at end of term, which is too old to be chief executive of anything, let alone the United States of America. If DeSantis runs against Biden in 2024, then DeSantis will easily win - he doesn't even need to campaign".

It was just under a month ago that Musk said he was leaning towards DeSantis for a presidential run in 2024, where he tweeted: "I voted for Mayra Flores - first time I ever voted Republican. Massive red wave in 2022". He was asked "what are you leaning towards" by Tesla Owners Silicon Valley, to which he simply replied: "DeSantis". 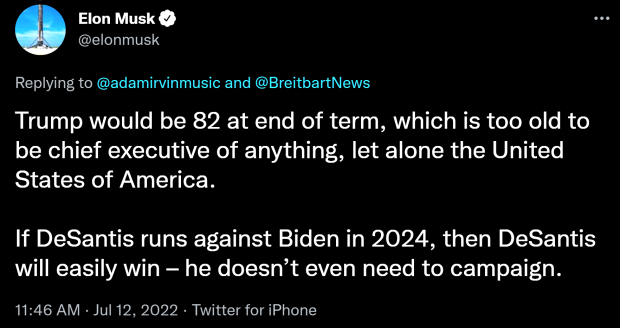