Elon Musk has been whipping his opponents as well as everyone who doesn't like him, into an absolute mental meltdown with his constant tweets... now throwing his support behind Florida Governor Ron DeSantis for president in 2024.

In some new tweets over the last 24 hours or so, Musk said that he backed the successful Republican congressional candidate -- Mayra Flores -- during a special election in Texas on Tuesday. Musk said: "I voted for Mayra Flores - first time I ever voted Republican. Massive red wave in 2022".

Tesla Owners Silicon Valley tweeted, asking: "I assume republican for president 2?" to which Musk replied: "tbd" to which he was replied, asking "what are you leaning towards" which is when Musk dropped the big one: "DeSantis".

Musk was also asked about Andrew Yang, with Pranay Pathole asking "What do you think about @AndrewYang?" to which Musk replied: "I supported Yang last time, but DeSantis has a better chance of winning".

DeSantis hasn't confirmed if he's running for president in 2024 as the GOP candidate, but at the same time he has a huge support base, has been raising oodles of campaign money, and is out in front of cameras all of the time. Unlike Biden, who has been hiding before he was even president. DeSantis has also praised Musk in the past, with DeSantis saying it would be a hit to the "failed legacy media" if the Twitter deal went through.

DeSantis said: "They were used to going around a lot of those failed legacy media outlets like NBC and CNN that no one trusts anymore. It seems like over the last five or six years, these big tech companies, including Twitter, have gone from open platforms to being enforcers of the narrative". 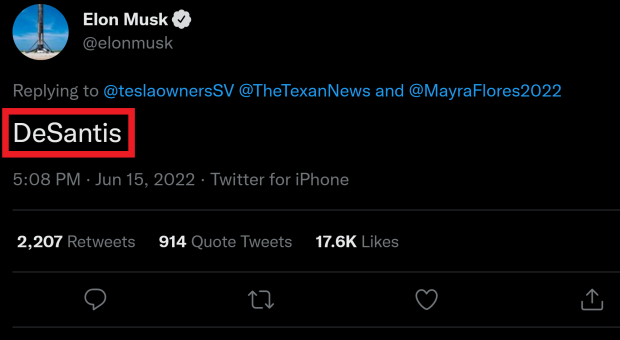