A derecho has hit several states in the US, and the storm was so powerful it changed the color of the sky.

A derecho is a collection of powerful thunderstorms that are known to travel extremely far and fast, as well as cover an area as large as 100 miles across. South Dakota, Iowa, Nebraska, Minnesota, and Illinois all experienced a derecho on July 5, and the massive storm brought gale-force winds to several areas across the aforementioned states. Huron, South Dakota, recorded wind speeds of up to 90 mph, with Miner, S.D reporting wind speeds of 99 mph and softball-sized hail.

The American Meteorological Society will classify a storm as a derecho when it has caused damage either continuously or intermittently over a region of 400 miles, 60 miles wide. Notably, the National Weather Service adds that windspeed is also taken into account when a classification is being made, with meteorologists taking into account top wind speeds of 75 mph or more. 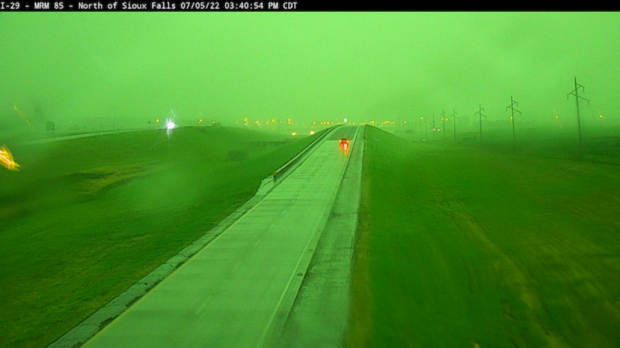 There was plenty of windspeed above 75 mph, with multiple locations reporting more than at least 80 mph winds that lasted between 20 and 30 minutes.

As the storm approached now-affected areas, individuals noticed that the color of the sky changed to a different color - displaying a greenish, apocalyptic-looking hue. WAPO reports that researchers believe the green color is a result of the storm holding a very large amount of water.

While logically that makes sense, some researchers aren't fully convinced of the process.