Multiple photographers have captured the phenomenon unwittingly, as it is invisible to the naked eye.

The phenomenon is known as space jellyfish, and occurs when sunlight reflects off of plumes of exhaust gases from recently launched rockets, particularly later in the evening or in the early morning. The phenomenon has been observed more frequently as more launches occur, and with the advent of reusable rockets, exhaust gases are also present when a rocket fires its engines as it returns to the ground.

Photographer David Johnston was capturing shots of the Milky Way on the night of June 19th when he noticed a large red spot in one of his photos, ruining his picture. It proceeded to grow in subsequent images, dominating the sky, despite being invisible without the camera. A friend of Johnston's suggested a rocket launch could be responsible. Coincidentally, SpaceX had launched one of its Falcon 9 rockets, carrying a Globalstar satellite minutes before when Johnston first noticed the red appear in the sky.

The rocket launched at 12:27:00 am local time and began re-entry burns 8 minutes and 15 seconds into the flight, coinciding with the timestamp of Johnston's first image with the red space jellyfish visible, taken at 12:35:15 am. Other photographers, such as Kyle Henry on Twitter, were also able to capture the event. 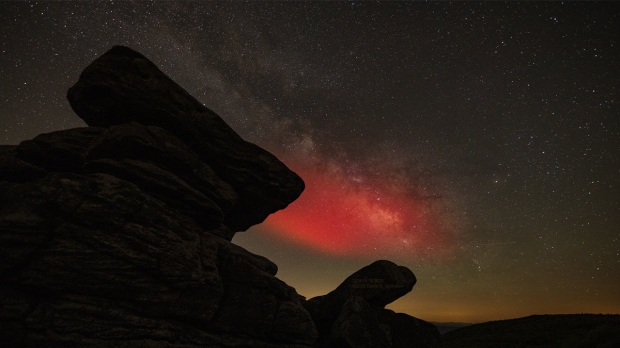