The new robotic lunar rover has a humanoid upper body and four wheeled legs, resembling a centaur from Greek mythology, a creature with a human upper body and the lower body of a horse.

The lunar rover is called the R1 robot and was developed by GITAI, a space robotics startup, in partnership with Japan's space agency, JAXA. The R1 has two arms with articulating claws for hands, cameras on its head that resemble eyes, and each of its four wheels can rotate independently with complete 360-degree freedom.

During a test at a JAXA facility, the R1 traversed uneven terrain peppered with rocks, designed to simulate a lunar environment. The rover also showed off various locomotion maneuvers, and a later test showed an operator controlling the robot with a virtual reality (VR) headset and handheld controls.

In the test, a crane lowers a case down to the rover, which it then unhooks and lays on the ground in front of it before opening it up. Inside are the components of a solar panel, which the rover precisely assembled in under an hour. Another test demonstrates the robot's ability to sample the soil beneath it directly. 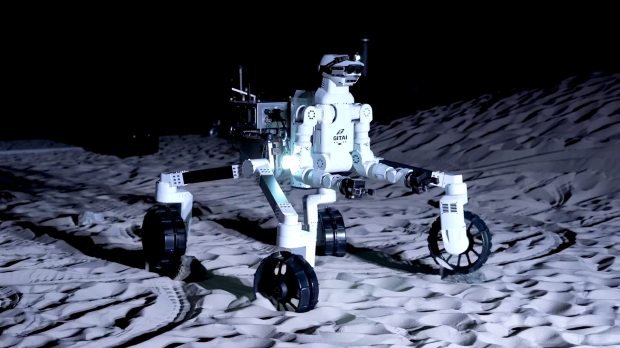 Across the Airless Wilds: The Lunar Rover and the Triumph of the Final