Grand Theft Auto V has now sold 165 million units to date thanks in part the re-releases on PlayStation 5 and Xbox Series X. 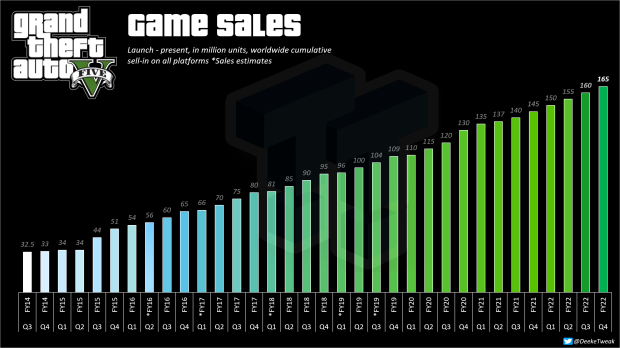 GTA V has now sold a mighty 165 million units since the game has released in 2013. The game is now available across three console generations, and the most recent re-release on next-gen consoles help boost sales and adoption. GTA V has sold 5 million copies per quarter for many quarters in a row, and FY22 is no exception.

These numbers show GTA V now makes up 44% of total franchise sales--the Grand Theft Auto IP has now sold 375 million units worldwide. TTWO says that GTA Online's performance has boosted 8% over last year, which was one of the largest periods of all time for the online game.

We'll have more data on total spending and earnings within the GTA franchise so keep a look out for that.