NVIDIA has announced its Computex 2022 keynote, penciled in for May 23 @ 8-9PM PDT with 6 speakers getting ready to talk your ear off. 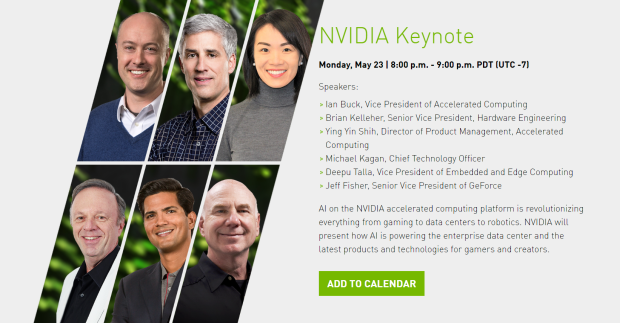 I wouldn't be expecting any new GPU announcements, but rather NVIDIA will most likely highlight everything the company has achieved in the last 6 months (new GPUs including the delayed GeForce RTX 3090 Ti, as well as their next-gen Hopper GPU architecture). The last time we saw Jeff was at CES 2022 earlier this year, when he announced the new GeForce RTX 3090 Ti graphics card.

AMD is hosting a keynote on the same day -- May 23 -- with CEO Dr. Lisa Su. We should expect AMD to lay out its plans for the Zen 4-based Ryzen 7000 series "Raphael" CPUs as well as -- well, here's hoping -- some details on their next-gen RDNA 3 graphics architecture.