A compilation of Ubisoft's confirmed and leaked games suggests the publisher has broken its promise to gamers. 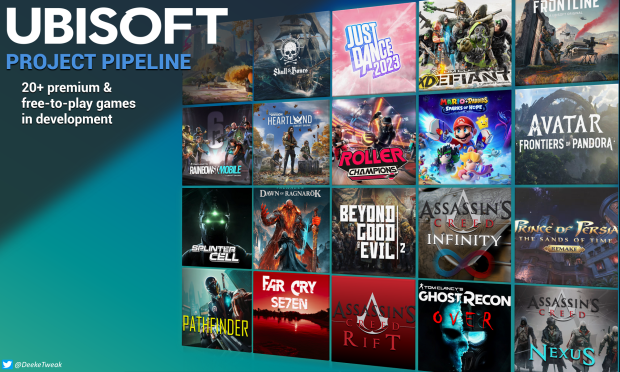 Back in 2019, Ubisoft hit live service breakpoint: Ghost Recon Breakpoint underperformed, signalling a major re-think for the publisher. Ubisoft strategized by delaying Watch Dogs Legion and Rainbow Six Extraction and promised to differentiate its games to ensure players have a wider offering of distinct experiences.

"While many of our titles are strongly differentiated, we need to ensure this is the case for all of them. We are already acting on these learnings and tackling these issues head on," Ubisoft CEO Yves Guillemot said in 2019.

Fast-forwarding to 2022 and we see that Ubisoft's pipeline of upcoming titles is quite derivative. Ubisoft is developing a multitude of free-to-play games (which it refers to as low-risk) that aim at broader audiences. Ubisoft seems to be experimenting with a lot of F2P titles that share very similar qualities, namely action-based shooters in a commoditized live service environment, likely with the goal of winning over Fortnite and Warzone players. 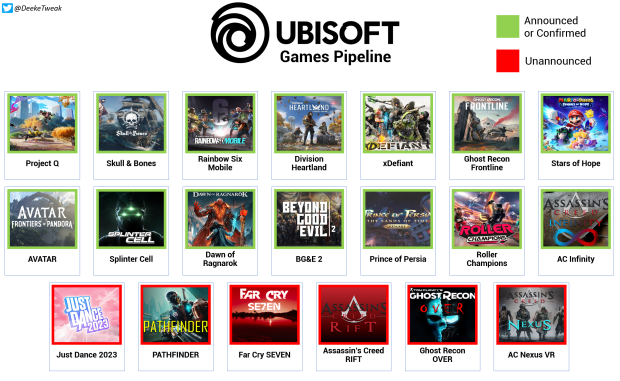 We've compiled a list of most of the currently announced and unconfirmed/leaked Ubisoft games in one place. The list consists of 20 games that range from premium titles to F2P and even VR games that have been put together from various leaks, rumors, and reports.

There are seven free-to-play games in the list and all of them are shooters. Some, like Project Q, Rainbow Six Mobile, and xDefiant, are hero-based shooters.

It seems Ubisoft has multiple games that lead to the same destination: Action-based, free-to-play online shooters. Right now that does seem to be the most lucrative segment of the video games industry, with Fortnite and Warzone both bringing in billions after Microsoft and Sony take their cuts.

The aim comes at an interesting time for Ubisoft, who in 2020 overhauled its "editorial team," which is the group responsible for making every high-level decision with Ubisoft's game IPs, to help meet the common goal of differentiation.

One goal supersedes all others, though: the quest for digital dominance. This quest emphasizes more live service games, monetization, and entry points into gaming's most lucrative segment.

"80% of expenses are being used to substantially expand premium offerings in 3 ways," Guillemot said, outlining the following:

Around 20% of our current investments are targeted at free-to-play to expand our brands' universes and bring them to a wider audience across all platforms including mobile. Each of these premium and free-to-play projects are built to maximize impact on each respective brands' universe."

"We are also convinced of the strategic value of re-investing a portion of our highly-profitable and cash-generating premium core business into free-to-play. This major segment indeed offers exciting growth and value creation opportunities for Ubisoft with an attractive risk-reward profile."