Sotheby's expects it will get anywhere between $330,000 and $551,000 for a receipt that transfers ownership of an imaginary art piece. 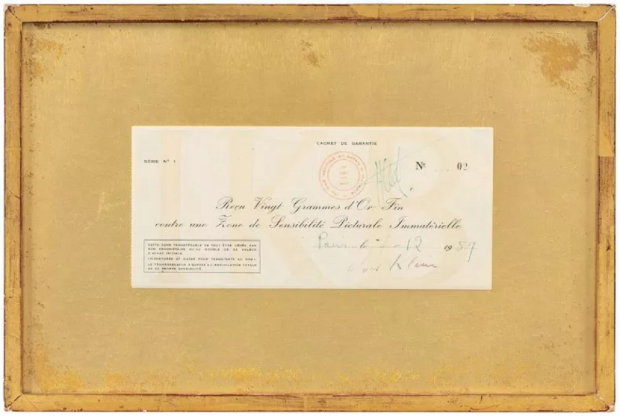 The 1959 receipt comes from French artist Yves Klein who conceived the idea of allowing lovers of art to own "zones of immaterial pictorial sensibility" or "zones de sensibilite picturale immaterielle", as translated in French. Sotheby's explains on its website that on April 28, 1958, "The Void" art exhibition was held at the Irs Clert Gallery in Paris, which had all of its contents removed for the opening. The French artist said that despite the gallery being empty, it was "saturated with 'pictorial sensibility in its pure state.'"

Sotheby's explained, "A few months later, the finalization of the receipts and the ritual accompanying the 'transfer' made it possible to inscribe this 'sensibility' in the field of visual arts for good, and for each collector to become the definitive owner of a 'zone of immaterial pictorial sensibility." Sotheby's compared the receipt concept and NFTs/blockchain technology, saying that Klein's receipt could be viewed as a precursor to the emergence of a new multi-billion-dollar market. 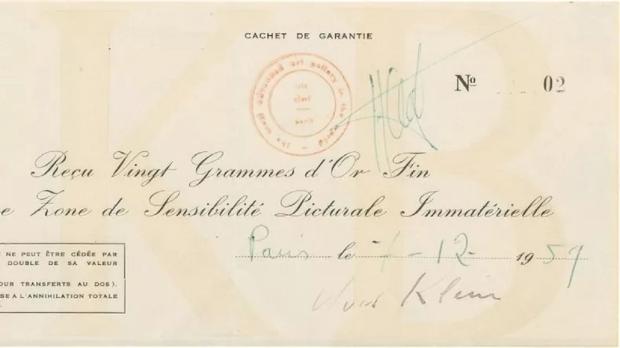 Adding, "there were three transfer ceremonies - all well documented. Some have likened the transfer of a zone of sensitivity and the invention of receipts as an ancestor of the NFT, which itself allows the exchange of immaterial works. If we add that Klein kept a register of the successive owners of the 'zones', it is easy to find here another revolutionary concept - the blockchain."

The auctioneer explained that the receipt that will soon become available for bid comes from the Collection Loic Malle and has been on display multiple times over the past decades. Sotheby's will begin the auction at 5 pm in Paris on April 6.