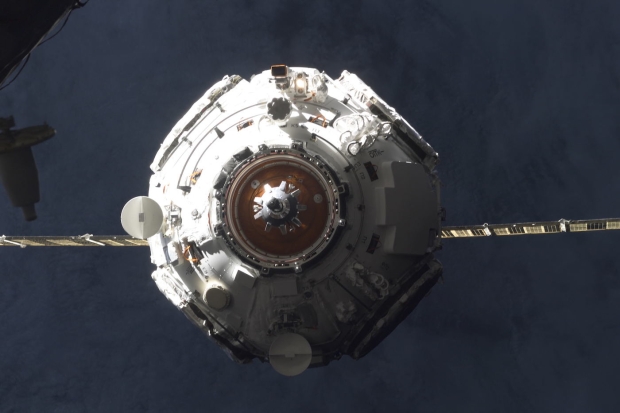 "It was as flawless a docking as you can have," said Rob Navias of NASA.

Prichal joined with Russia's Nauka module aboard the ISS at 15:19 UTC, slightly ahead of schedule, with the docking hooks closing at 15:25 UTC. The module arrived with around 2,200 pounds (1,000 kilograms) of cargo and supplies for the crew aboard the ISS.

The Prichal module expands the docking capabilities of the ISS, adding six new ports for the Russian portion, with five of them available for newly arriving spacecraft. It can also transfer fuel to Nauka, the module it has docked to after Progress 78, the previously docked spacecraft, left to make room for Prichal's arrival.

Prichal was launched from the Baikonur Cosmodrome in Kazakhstan aboard a Russian Soyuz rocket on November 24th. The four-tonne module was delivered from the rocket to the space station using another modified Progress spacecraft. This Progress craft will remain docked until late December, when it is set to detach and re-enter the atmosphere to meet the same fate as Progress 78.

With the addition of Prichal, the internal volume of the ISS has increased by approximately 494 cubic feet (14 cubic meters). It will remain docked to Nauka's Earth-facing port for the foreseeable future. It will "expand the technical and operational capabilities of the orbital infrastructure of the Russian segment of the ISS," according to Roscosmos, Russia's federal space agency.

Voices of the Soviet Space Program