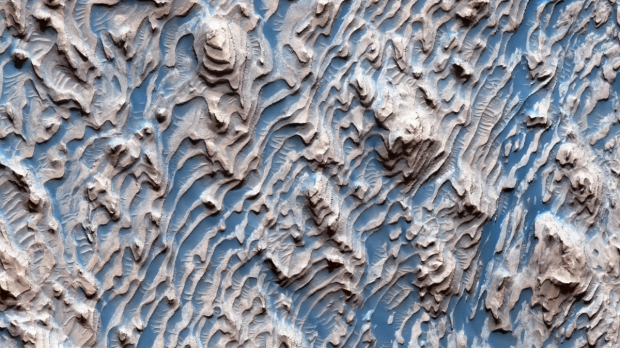 The newly released image shows layering in the sedimentary rock in the Danielson Crater on Mars. From top to bottom, the terrain captured in the image spans just under a kilometer, and the image was taken while the MRO was orbiting 276 kilometers (171 miles) above the surface.

Scientists do not know exactly how the rocks formed but can infer from the regularity of the layers that a continually repeating process is responsible for their formation on an annual or even longer timescale. The regularity suggests that random phenomena like meteor impacts did not cause the layers to accumulate. Some scientists suggest their formation may be associated with climate changes related to orbital variations, while others suggest upwelling groundwater could be responsible.

"The rock was formed millions or billions of years ago when loose sediments settled into the crater, one layer at a time, and were later cemented in place. Cyclical variations in the sediment properties made some layers more resistant to erosion than others. After eons, these tougher layers protrude outward like stair steps. Across these steps, the winds have scattered sand (typically appearing darker and less red, i.e. "bluer" in contrast-enhanced color), giving rise to the zebra stripe-like patterns visible here," NASA wrote in a previous blog post on the Danielson Crater.

The full resolution image, clocking in at 10240 x 4310 pixels, is available for download on the UAHiRISE flickr page, as part of a 500+ 8K photo collection on flickr collected from the HiRISE camera. 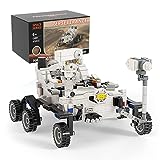