The cryptocurrency market has been in a slow decline since November 2021 when it peaked out at an all-time high of $69,000.

Despite the price of Bitcoin being in a decline since November some analysts are still predicting that the digital asset is still on track to be valued at $100,000 per coin sometime in 2023. With inflation being a major economic concern worldwide, with the additional strain on the financial system from Russia's war with Ukraine, the cryptocurrency market seems plagued with fear, uncertainty and doubt. A recent small glimmer of bullish hope surfaced when details of Biden's new executive order leaked

Cryptocurrency whales (individuals who own large quantities of various/singular digital assets), such as Tesla and SpaceX CEO Elon Musk have been known to be big advocates for certain cryptocurrencies, and with the market being in an overall slump it raises the question "has Musk jumped out of the cryptocurrency game?".

In a recent sling of tweets from Musk, the SpaceX CEO asked his Twitter followers what they think about the "probable inflation rate over the next few years?". Michael Saylor, major Bitcoin advocate and CEO of MicroStrategy, said the following:

Musk replied with "As a general principle, for those looking for advice from this thread, it is generally better to own physical things like a home or stock in companies you think make good products, than dollars when inflation is high. I still own & won't sell my Bitcoin, Ethereum or Doge fwiw." 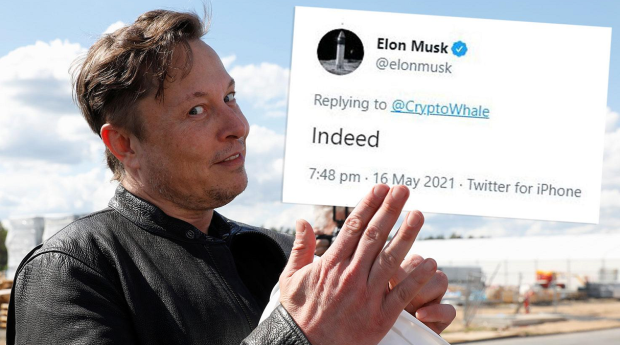