NVIDIA hasn't confirmed whether it was hacked or not, but it looks like there's a bit of a conspiracy theory building around what happened to Team Green. Supposedly, a South American hacking group called "LAPU$" are responsible for the cyberattack on NVIDIA.

LAPU$ reportedly attacked NVIDIA's internal servers through a ransomware attack, taking over 1TB of NVIDIA's precious data. NVIDIA hasn't confirmed this, obviously... but another tentacle of this conspiracy is that NVIDIA reportedly hacked the hackers, in an attempt to encrypt their 1TB of data (that wasn't stolen, right?).

NVIDIA aren't hackers and I'm sure they might have a team of really smart people, but they wouldn't be anon-level digital soldiers like LAPU$ or Anonymous. The group made a copy of the 1TB of NVIDIA data in a virtual machine environment meaning that NVIDIA's attempt to out hack the hack will fail. 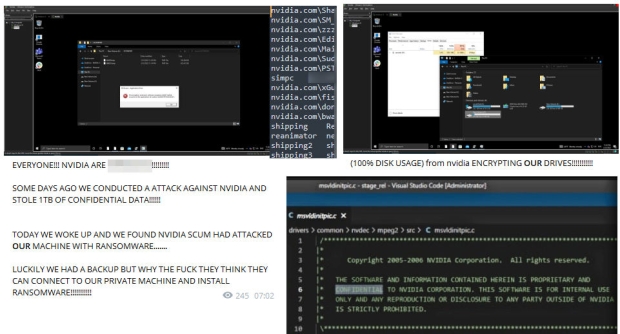