Candy Crush developer King has consistently made more revenues than Blizzard over the last 3 years. 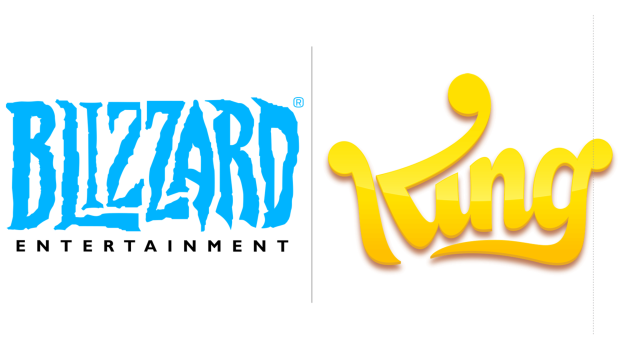 Activision's latest financials give key insight on its three business segments: Activision, Blizzard, and King. Over the years the revenue pecking order has roughly matched up with its ABK namesake. Activision typically makes the most revenues thanks to annualized Call of Duty games, deferrals, and strong monetization, followed by Blizzard with its live games, and King usually ends up third place with its mighty F2P empire.

However Blizzard's presence has slowly fallen year-over-year. Now Candy Crush-maker King is overtaking Blizzard in terms of revenues. In fact, King has made more yearly revenues than Blizzard for the 3 consecutive years across 2019, 2020, and 2021. 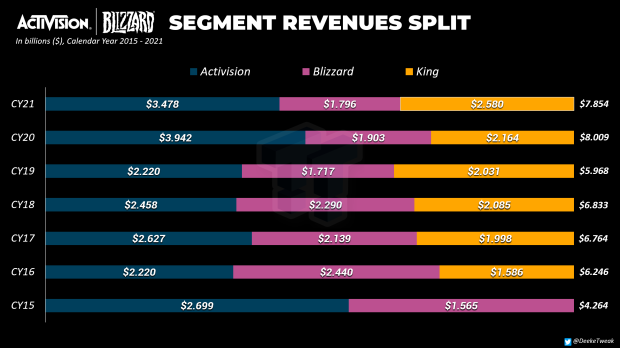 This technically makes sense considering Blizzard hasn't released very many new games in that period. King currently operates over a dozen F2P games, whereas Blizzard manages a handful of monetized games like World of Warcraft, Overwatch, Heroes of the Storm and Hearthstone. 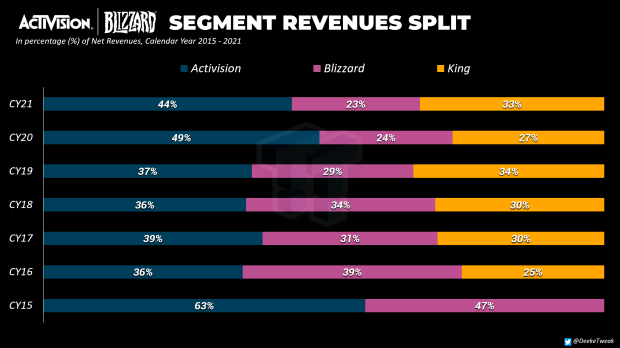 The numbers are a result of two things: Blizzard is making less money and King is making more. King's revenues are up 27% from 2019 - 2021, hitting a record $2.58 billion throughout last year. Blizzard's are down nearly 5% in that period.

Blizzard's MAUs have also taken a hit in those corresponding years, going from 32 million monthly active users at the start of 2019, stabilizing throughout the year, and slowly starting to fall in 2020. By 2021, Blizzard MAUs were down to 24 million--the lowest point in the past 7 years.

The ongoing controversy surrounding Blizzard company culture and sexual harassment lawsuits have likely taken a bite out of the company's overall playerbase, however fans are also moving on to other live games, especially now that big sequels like Overwatch 2 and Diablo IV have been delayed. 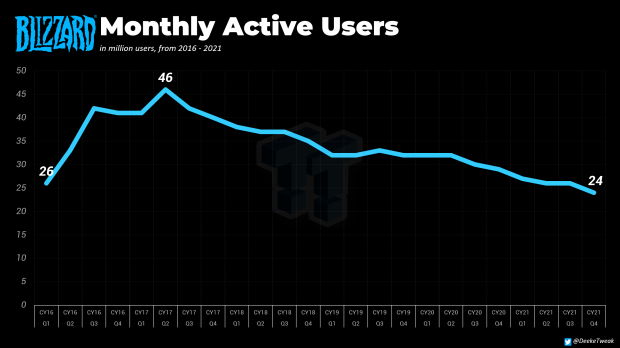 Blizzard remains an incredible powerhouse despite the drop in revenues and MAUs. The games-maker hasn't had to release many new products and has still made $13 billion in total revenues from the 2019 - 2021 tracked period.

This is a result of successful live games, engagement-driven operations execution, and strong monetization.

So what does that tell us? King can help stabilize and even boost earnings while Blizzard works on games and floats on microtransaction and services revenues. It's a synergy that most companies would be envious of.

It's no wonder that Microsoft wants to buy Activision-Blizzard-King.