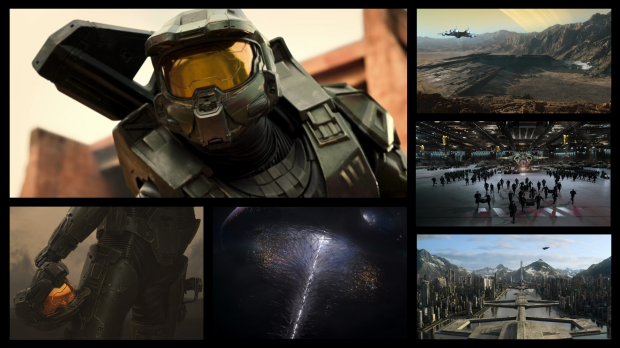 Today 343 Industries revealed a ton of new info about the upcoming Halo TV show, which is set to premiere on Paramount+ sometime soon. The post mentions a lot of interesting points like confirming the SPARTAN-II programs grisly, dark origins will be a part of the show, and also touches on the show's new divergent timeline.

The Halo TV show takes place in the "Silver" timeline, which is a separate and parallel timeline that exists outside of the base Halo canon. (Silver is also the name of the show's fireteam--Chief was part of Blue Team in the original canon). This gives 343i lots of room to bend and manipulate timelines and events to make things more show-friendly.

It also gives 343i some interesting potential for game-TV crossovers. The studio is open to the idea of transmedia content rolling back into the source material; content from the Halo TV show could be featured in Halo Infinite's future updates and content drops, including vehicles, characters, weapons--and of course monetized cosmetics.

Below is an exchange between 343i's community writer and Halo alum Frank O'Connor.

"Absolutely - and ideally both ways. The show certainly is built on the shoulders of Halo's canonical giants. The history, the aesthetic, the narrative underpinnings, and so on, are all directly aligned with, inspired by, based on, or aligned with existing Halo stuff.

"Of course, there are tweaks. Armor has to be practical, for example, and Warthogs have to be able to pull off stunts as well as look right, but story differences create great opportunities to make new things that could potentially feature in future games - not just objects or effects, or designs, but people, events, inventions, and more.

"These are two different Narratives, but they are profoundly connected by the same DNA and the intention is to keep making the two the best they can be, not to distract from, avoid, or ape each other. But they are both distinctly Halo and those opportunities are boundless."

343 Industries has already tapped divergent, alternate timelines with its in-game Halo Infinite events. These events are called Fractures, alluding to breaks in temporal reality where dimensions cross over. The first event was Tenrai, which introduce samurai Spartans as monetized skins.

The Halo TV show could get its own Fracture event.

The studio reiterates that the core Halo canon will continue and won't be impacted by the show:

"Core canon will continue, unimpeded and unfettered by differences and divergences in the Halo television series. Likewise, the Silver Timeline will continue to draw from and explore existing elements, events, relationships, and more from the core canon, evolving in-parallel while retaining the themes that serve as pillars of Halo's identity."