The majority of surveyed video game developers are not interested in utilizing NFTs or cryptocurrencies in their video games, a new GDC report finds. 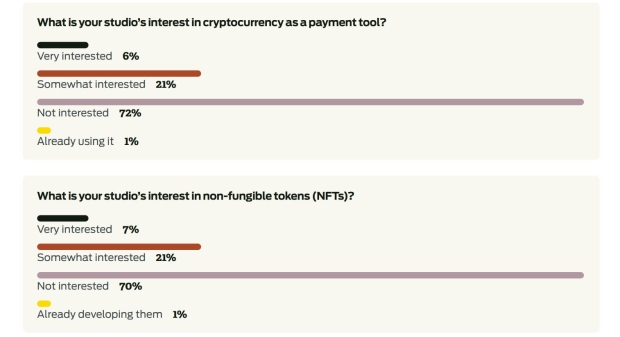 GDC's new State of the Game Industry 2022 report indicates that most participating game developers do not want to enter the play-to-earn marketplace with NFTs or cryptocurrency monetization schemes. According to the report, 70% of developers were not interested, whereas 7% were very interested and 21% were somewhat interested.

It's worth remembering that the survey sampling is not broad by any means and accounts for about 2,700 developers. This means that 1889 out of 2700 game developers had no interest in NFTs and crypto, and roughly 756 developers were highly or somewhat interested.

So what does this tell us? The highly speculative--if not apparently lucrative--NFT market is still a wild card for the games industry. Attempts at experimentation have delivered significantly volatile results; Ubisoft's foray into NFTs with the hopes of making crypto off of digital in-game resales has faltered, whereas Konami's direct NFT auctions have generated over $164,000 so far.

EA, Square Enix, Ubisoft, and other major players want to enter the NFT market but things are still extremely immature and it'll take a lot of iteration and experimentation before many developers feel comfortable with NFTs--if at all.