Well, the moment has come... our AI "xenobot" self-replicating robots are going to rule us all and we won't be able to stop it.

But seriously, researchers have just announced they've created tiny living robots capable of self-replicating themselves inside of a dish by pushing loose cells together. They're called "xenobots" and they're made from frog cells, representing the first time a multicellular organism has found a way to reproduce in this particular way.

The cells collect together in clumps where they'll form a sphere that would have around 3000 cells, taking around 5 days to happen. Each individual clump is around half a millimeter wide and is covered in a minuscule hair-like structure, which sounds weird but the hair-like structure acts like flexible oars in water... they move the xenobots forwards in corkscrew paths, explains Joshua Bongard, senior author and computer scientist at the University of Vermont.

Where it gets more interesting is that the team noticed that the individual clumps of cells were working together in a bigger swarm, where they would push other loose cells together... eventually, this makes piles of cells that gradually formed new xenobots.

The study showed that groups of 12 xenobots placed in a dish of around 60,000 single cells seemed to be all working together, to either make 1 or 2 new generations of xenobots. Bongard explained: "One [xenobot] parent can begin a pile and then, by chance, a second parent can push more cells into that pile, and so on, generating the child".

The authors note that every round of replication created slightly smaller xenobot offspring, where eventually the offspring that had under 50 cells would lose their ability to swim, and their ability to reproduce.

Xenobots collect frog cells and shaping them into Xenobabies:

That's when the team turned to AI, and then used an algorithm based on evolution... they predicted which starting shapes of the xenobots would make the most robot babies, or xenobots. The simulation predicted that C-shaped clusters would have the most generations, so then the team sliced spherical xenobots into C-shapes, which then saw these edited xenobots producing for 4 generations... double that of the spherical xenobot parents.

Bongard added: "By manipulating the shape of the parents, you can make a better shovel to move more cells".

Sam Kriegman, co-author of the Xenobots paper explained: "It was exciting to see that we could [make] this Von Neumann machine, but using cells instead of robot parts. Once you move through the world, it's unpredictable, things are messy, Doug came up with the notion of building robots out of biological stuff. You get this intelligence for free. And we were off to the races". 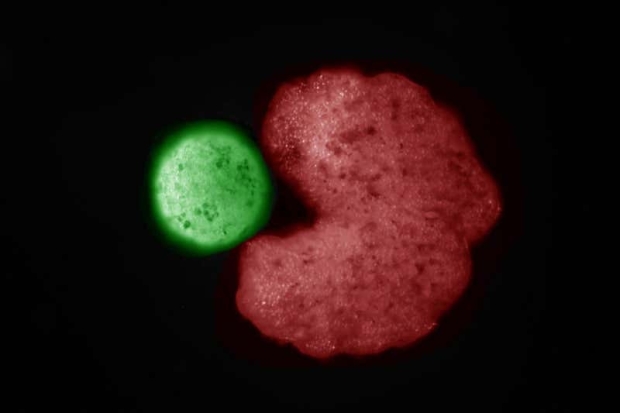 Joshua Bongard, senior author and computer scientist at the University of Vermont said: "People have philosophized about this forever. But now you can actually do experiments to create biological machines, or machines that make biology, which in turn make machines".

Biologist Douglas Blackiston added: "This is an AI designing life, or designing a robot, whatever you want to call it. These are things that are not under the purview of [natural] selection". When probed about whether the AI-powered Xenobots were intelligent, Blackiston said: "My opinion is that they're not intelligent".

Bongard adds: "[Definitions] are being driven into extinction because of these technologies. Xenobots are a product of AI and AI itself is helping to drive to extinction our standard definitions of intelligence".