The LightSail 2, a small CubeSat fitted with a solar sail spanning 32 square meters (433 square feet), is still sailing through Earth's orbit two and a half years after launch. 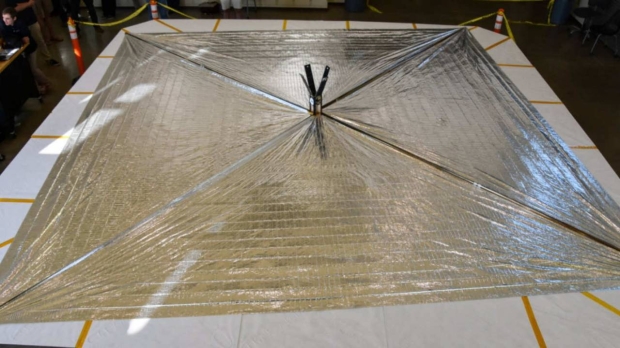 LightSail 2 is a crowdfunded project which amassed $7 million and is run by The Planetary Society, a U.S.-based space education and outreach non-profit organization. Much like sails on a boat catch the wind to move them forward, the solar sails are used to catch photons from the sun in space to propel the LightSail 2 forward and demonstrate their viability for space travel.

"We're going to a higher orbital altitude without rocket fuel, just with the push of sunlight. This idea that you could fly a spacecraft and could get propulsion in space form nothing but photons, it's surprising, and for me, it's very romantic that you'd be sailing on sunbeams," said The Planetary Society's CEO Bill Nye at a press conference following LightSail 2's launch.

Since LightSail 2's journey began in June 2019, NASA has implemented solar sails into the designs of its upcoming NEA Scout, Solar Cruiser, and ASC3 missions. Orbiting at an altitude of 687 kilometers (426 miles) above the Earth, friction in the atmosphere is working against the craft to slow it down. Generally, the propulsion provided by the sails allows it to overcome this. However, the spacecraft is currently descending through the atmosphere as the sails don't always generate enough thrust to maintain the same altitude.

"Thanks to optimized sail pointing over time, altitude decay rates during recent months have been the best of the entire mission. Thrust even occasionally overcame atmospheric drag, slightly raising the spacecraft's orbit." said Jason Davis of The Planetary Society in a statement.

"Below-average sun activity has kept Earth's upper atmosphere thin for much of the mission, creating less drag on the sail. That has recently changed, with the sun becoming more active and emitting significant solar flares. The LightSail 2 team believes that this activity is likely now causing higher orbital decay rates than those seen earlier in the mission," continued Davis.

The LightSail 2 fluctuates in altitude by a few hundred meters each day, climbing when it catches more sun and falling without it. Eventually, increased solar activity from solar flares and sunspot formation will lead to the LightSail 2 losing altitude until it de-orbits entirely and burns away on re-entry. This solar activity thickens the atmosphere, increasing friction on the craft, but mission engineers have estimated this outcome could still be at least a year away.

Throughout its mission it has taken many pictures, and will continue to do so until the very end. You can view them on The Planetary Society's website.