Todd Howard pretty much confirms Creation Club will continue, and may even find its way into future games like Starfield and The Elder Scrolls VI. 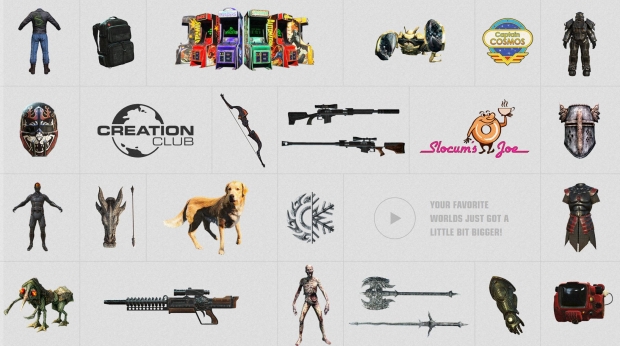 From the sound of it, Bethesda's unpopular "paid mods" Creation Club program won't end with the new Skyrim Anniversary Edition releasing this month. In a recent IGN Unfiltered interview, Todd Howard made the case that Bethesda is very passionate about the modding community and offering ways for creators to turn their hobby into a possible career.

"When you think about the legacy of our games...you know, one of the reasons we're sitting here 10 years later is because of our modding community and what they've done with the game," Howard said, acknowledging that Bethesda has hired a bunch of Creation Club modders.

"Even as you get all the stuff and make it your own, you open up this menu and there's this even larger list of things...okay how do you want to customize it, what do you want to do.

"I think that's fundamental to what we want to do with games where creators can do that. And I think us being active in trying to make it more than a hobby for them, where they can make it their career, I think it's really really good and something we're going to continue to do."

While Howard doesn't confirm Creation Club will be included in Starfield--we don't know if mods are even supported, but that's likely the case--we might be able to expect Creation Club to show up in Elder Scrolls VI in some fashion.

Creation Club caught the enmity of gamers when it launched in 2017 due to its monetization of content that was available for free on PC. Bethesda is working with modders to make this content, and creators actually get a kickback for their work. On paper, it sounds great--gamers can support their favorite creators and get new DLC in return. In practice it wasn't so great.

Bethesda was charging premiums ranging from $5 for piecemeal armor sets to $20 for bigger content like dungeons. Creation Club was billed as high-quality DLC, but gamers were frustrated because they could get equivalent mods for free. This caused a rift in the modding scene and a lot of Skyrim and Fallout 4 mods were removed from the free console and PC mod scene, and the Creation Club patch itself broke many script extenders. Creation Club was a big disruptor in an already-stormy community.

Fast-forwarding to today and the sentiment isn't much better. Gamers are still mostly wary of Creation Club, but the new Skyrim Anniversary Edition will help amend some of that by releasing all Creation Club mods for free as part of the game.

Creation Club is a collection of all-new content for both Fallout 4 and Skyrim. It features new items, abilities, and gameplay created by Bethesda Games Studios and outside development partners including the best community creators. Creation Club content is fully curated and compatible with the main game and official add-ons.

No. Mods will remain a free and open system where anyone can create and share what they'd like. Also, we won't allow any existing mods to be retrofitted into Creation Club, it must all be original content. Most of the Creation Club content is created internally, some with external partners who have worked on our games, and some by external Creators. All the content is approved, curated, and taken through the full internal dev cycle; including localization, polishing, and testing. This also guarantees that all content works together. We've looked at many ways to do "paid mods", and the problems outweigh the benefits. We've encountered many of those issues before. But, there's a constant demand from our fans to add more official high quality content to our games, and while we are able to create a lot of it, we think many in our community have the talent to work directly with us and create some amazing new things.