On Monday, the four astronauts re-entered Earth with the SpaceX Crew Dragon capsule and were successfully retrieved after touching down.

NASA's Shane Kimbrough and Megan McArthur, French astronaut Thomas Pesquet of the European Space Agency, and Akihiko Hoshide from Japan boarded the Crew Dragon capsule that was still docked at the International Space Station (ISS) since their arrival to journey back down to Earth just after 2 pm ET on Monday.

The team of astronauts spent 9 hours navigating through Earth's upper atmospheres before approaching the thicker lower levels of the atmosphere, where the capsule then deployed its thrusters and parachutes to slowly guide the craft to its landing location in the Gulf of Mexico. Before the astronauts entered the capsule for their ride home, they were asked not to use the Crew Dragon toilet due to issues with it. Instead, the astronauts were asked to use the "undergarments" that are provided in the suits, which are essentially, space adult diapers.

McArthur said that the undergarments are "Suboptimal. But we are prepared to manage. Spaceflight is full of lots of little challenges. This is just one more that we'll encounter and take care of in our mission, so we're not too worried about it."

Kimbrough said, "It's great to be back to planet Earth". 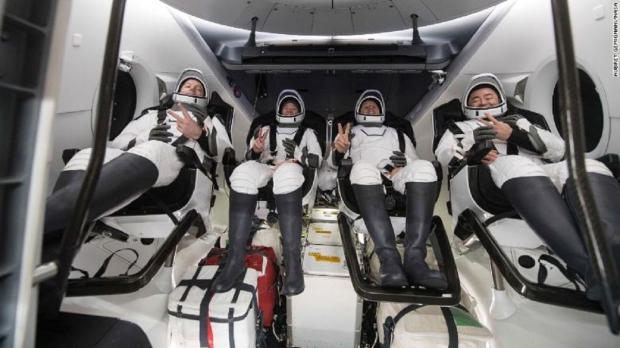