AMD has just confirmed its new EPYC "Genoa" and EPYC "Bergamo" CPUs at its Accelerated Data Center event -- where we were just introduced to the NVIDIA-destroying Instinct MI250X accelerator with its MCM GPU and 128GB of HBM2e memory.

The new AMD EPYC codename "Genoa" CPU will be based on the new Zen4 processor architecture from AMD, and will have a huge 96 cores -- just as the rumors said it would -- and support PCI 5.0 technology, the new DDR5 memory standard, and will be AMD's first platform with CXL interface support.

AMD's new EPYC "Genoa" is going to be based on the Zen 4 architecture, while the higher-end EPYC "Bergamo" that we've also been hearing lots about, will arrive on the "Zen 4c" core. EPYC Genoa will have 96 cores, while EPYC Bergamo ramps things up to a huge 128 processor cores -- the first of its kind, from AMD, again. 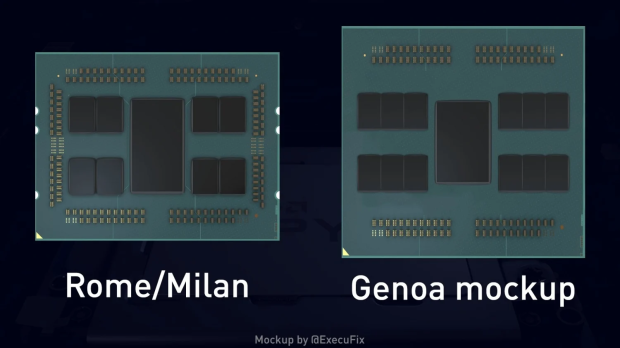 AMD explains: "'Genoa' is expected to be the world's highest performance processor for general purpose computing. It will have up to 96 high-performance "Zen 4" cores produced on optimized 5nm technology, and will support the next generation of memory and I/O technologies with DDR5 and PCIe® 5. "Genoa" will also include support for CXL, enabling significant memory expansion capabilities for data center applications. "Genoa" is on track for production and launch in 2022".

AMD explained Bergamo as a "high-core count CPU, tailor made for cloud native applications, featuring 128 high performance "Zen 4c" cores. AMD optimized the new "Zen 4c" core for cloud-native computing, tuning the core design for density and increased power efficiency to enable higher core count processors with breakthrough performance per-socket. "Bergamo" comes with all the same software and security features and is socket compatible with "Genoa." "Bergamo" is on track to ship in the first half of 2023".