NASA has taken to its blogs and social medias to confirm the existence of a massive solar flare headed directly towards Earth.

The solar flare was observed on October 28, and according to NASA, the flare came from the Sun's lower center which is directly facing Earth. At 11:35 a.m EDT, the Sun released the biggest of a series of flares, bursting out a large amount of radiation towards Earth that is expected to arrive very soon. The flare was categorized as an X1-class flare, X being the most intense categorization for solar flares.

The Sun entered Solar Cycle 25, and according to the space agency, this is the second X-class solar flare of the cycle, with the cycle lasting 11 years. Over the duration of the cycle, the Sun will go through active and quiet periods until it reaches its solar maximum, where its magnetic poles will flip.

While the radiation from the solar flare won't cause anything on Earth's surface to be affected, it can cause geomagnetic storms in Earth's upper atmosphere, which can interfere with GPS and communications signals as well as satellites. On a more positive note, the charged particles from the solar flare interacting with Earth's magnetic field can cause auroras. The space agency recommends those people who live in Northern US and Canada to keep an eye out for a possible light show over the weekend.

NASA states that the solar flare caused the launch of a coronal mass ejection that is expected to impact Earth tomorrow. 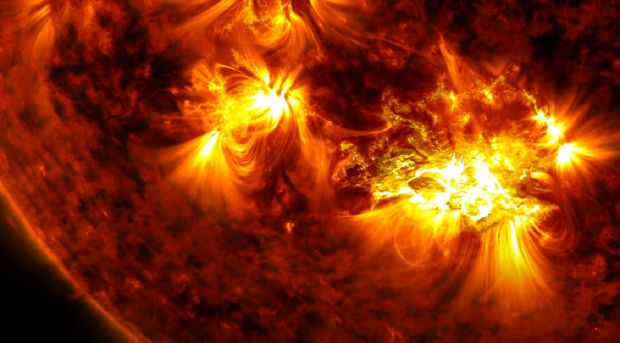