NASA recently confirmed the existence of a solar flare occurring on the Sun, which resulted in a plasma wave being launched directly towards Earth.

The space agency explained that Sunspot AR2887 erupted, causing a solar flare and a coronal mass ejection (CME) to be shot towards Earth's direction. The solar flare was classified as an X1-class flare, X being the highest categorization that is given to a solar flare. For those that don't know what flares are, they are burst of radiation that can't pass through Earth's atmosphere to harm humans. However, its impact on Earth can cause geomagnetic storms that knock out GPS and radio communications and interfere with satellites.

As for the flare that hit Earth's magnetic field on Oct. 31st at ~10:00 UT, the resulting impact was much less than anticipated as it only caused a G1-class geomagnetic storm. The reason for the weakness, as Spaceweather.com reports, is that majority of the CME missed Earth, which stands as an example that current computer models used to predict the events of the Sun aren't always 100% correct as there are still many unknowns about the Sun and its processes. More simply put, it's difficult to predict the motions of a celestial object located 93 million miles away.

The solar flare did cause auroras to appear in the sky in some locations around the world. One photographer, Harlan Thomas, snapped the below image in Alberta, Canada, just before sunrise. 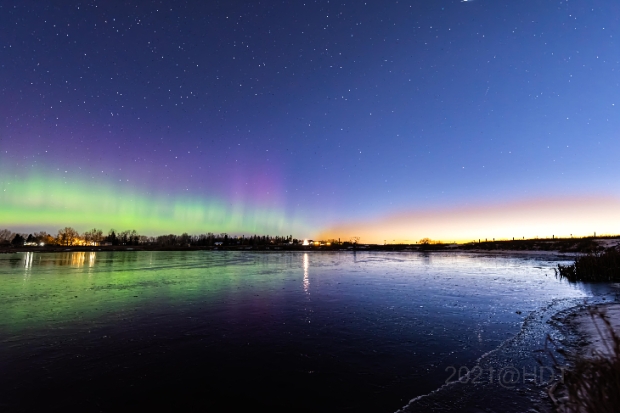 Thomas said, "It was a short-lived event. The auroras were active and battled the twilight until about 45 minutes before the Sun came up."