Like most PS5 gamers, Vanguard will make heavy use of the DualSense controller's new rumble tech. Similar to Black Ops Cold War, which had amazing next-gen tactile feedback, the new WWII-themed Call of Duty has its own multi-phase pressure-sensitive trigger haptics to significantly increase immersion. Guns will pop with recoil and power as you fire them, precision weapons will feel more satisfying, and gunfights will actually feel like lethal do-or-die battles.

There are four stages to a trigger pull in Vanguard: 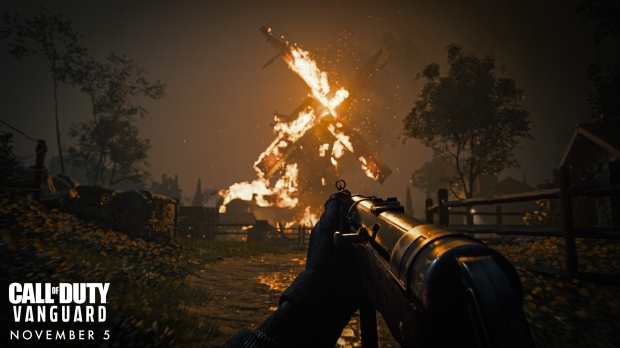 All the guns will have different stats and behaviors in battle, including varying degrees of tension and pressure-based actuation. The result is heavy marksman weapons feeling, well, more heavy and deadly, whereas auto-fire weapons will feel less impacting on a per-shot basis.

Sledgehammer says that scopes will actually play into the DualSense feedback too as downsight activation and L2 pressure requirements will increase or decrease based on the weapon, scope, and other attachments. It's a fine-tuned system that's hard to convey in words--DualSense feedback is something you simply have to feel for yourself.

Our goal in Call of Duty: Vanguard was to simulate the trigger weight of real-world weapons, and to give the player the opportunity to find the trigger pull that works for them in the game. This is greatly aided by the feedback applied by the DualSense controller's adaptive triggers.

It's at the "break" stage that the DualSense controller's adaptive triggers apply varying degrees of feedback to help create the feeling of weight on the trigger. This feedback is applied differently for different weapons, creating a more accurate sense of trigger weight for each.