According to YouTube ratios, fans are much more excited about the new PS2-era GTA trilogy remaster collection than they are for GTA V E&E. 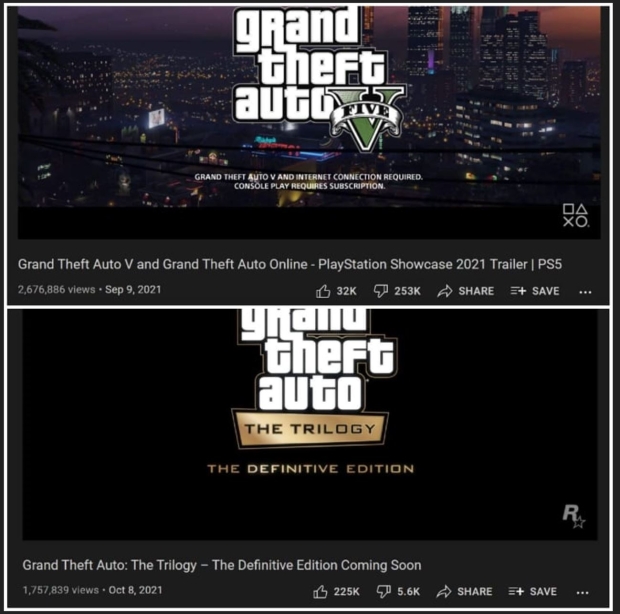 The new Grand Theft Auto: The Trilogy - Definitive Edition (what a name) is absolutely annihilating Grand Theft Auto Expanded & Enhanced in terms of ratings and fan sentiment. The GTA trilogy announcement trailer on YouTube currently has 225K likes out of 230.6K total ratings, making for a 97.6% like ratio. 12.8% of viewers liked the video.

GTA V's E&E PS5 trailer is another story. The footage triggered controversy within the GTA community with lots of criticism being levied at Rockstar for things like GTA V E&E graphics, accusations of cash grabs, and lack of transparency on new included features. At the time of writing the GTA V E&E trailer has 253K dislikes out of 285K total ratings, which is an 88.8% dislike ratio. 9.4% of the trailer's total 2.6 million viewers disliked the trailer.

Rockstar has yet to officially address this controversy with new concrete info, screenshots, or footage, and the most recent announcement post only discussed new features and content coming to GTA Online.

The GTA trilogy remaster is coming to platforms digitally on November 11, according to sources, and will also have a physical release on December 7.