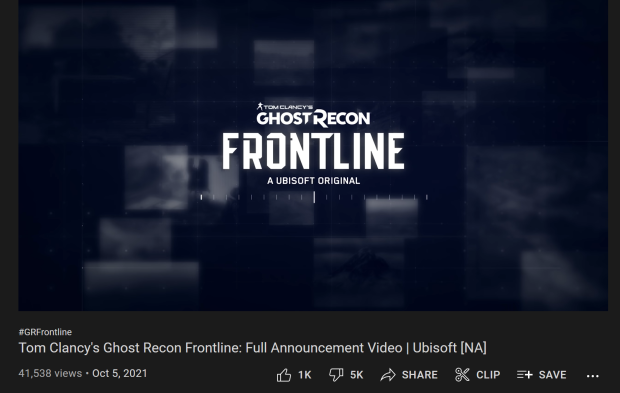 Ghost Recon Frontline is the latest of Ubisoft's new free-to-play initiative. The game is a 100-player+ battle royale that's clearly meant to take on Warzone, complete with classes, a huge evolving and dynamic map, and lots of "tactical opportunities." There's just one issue: Gamers apparently don't want it.

The game's first impression hasn't been a good one in the eyes of the community, and Ghost Recon Frontline's reveal trailer has a staggering 83% dislike ratio with 5K dislikes against 1K likes. This is somewhat reminiscent of Grand Theft Auto V E&E's disastrous ratio on YouTube (248K dislikes vs 31K likes).

The comments section rips on the footage with the major sentiment being that fans asked for anything but a free-to-play battle royale. "So the new Ghost Recon isn't even Ghost Recon it's literally Warzone!!" one user says.

"The Community: "we want a return to roots hardcore tactical stealthy shooter" Ubisoft: "We hear you, here's a Battle Royal game," another says.