There's a new trojan going around that is now targeting gamers, known as "BloodyStealer" that is attacking gaming services like Bethesda, Epic Games, GOG, EA Origin, Steam, Telegram, and VimeWorld

BloodyStealer is able to take gamers' data including passwords, credit card details, screenshots, cookies, and client sessions from the above gaming services. The malware was discovered back in March 2021 in an advertisement on an underground forum, according to Kaspersky.

The malware has built-in protections to defend itself against analysis and has already been deployed in Europe, Latin America, and the Asia-Pacific region. Kaspersky notes that the sellers of BloodyStealer are selling the "malware-as-a-service (MaaS) distribution model" which costs $10 per month, or $40 as a lifetime license. 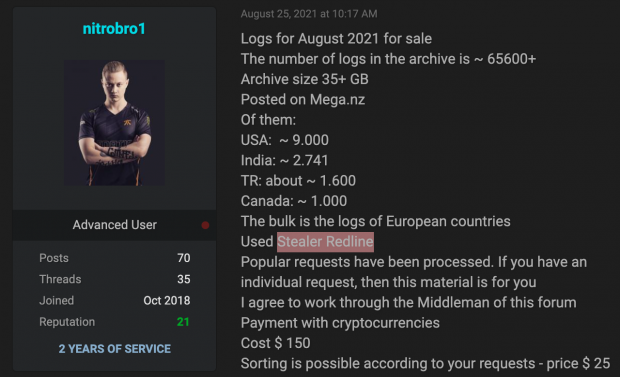 Kaspersky writes that there are databases of accounts available as logs, for sale, with the attackers advertising they have the geography of users, the time span of the logs that were collected, and more. A log containing 65,600 records with 9000 users in the US was selling for $150 -- or just $0.2 per record).

There are individual games sold from these accounts, a nice feature that even as a customer of the services hacked you don't get -- you can't just trade your games with friends. But these hackers can, and 'steal' the 'digital game' and sell it individually, with a game like Need for Speed or NFL 21 selling for less than $0.50 -- what a steal.

Kaspersky has a few warnings on how to not fall victim to BloodyStealer, or similar thieves: