Using new techniques to observe the constellations of Taurus and Perseus, astronomers have been able to discover something "unprecedented".

A new study published in The Astrophysical Journal has detailed the discovery of a spherical-shaped void in space between the two star-birthing constellations. When viewing the constellations in 2D images from Earth, astronomers have to consider the illusion of forced perspective. But now, due to observational advancements, astronomers have achieved a breakthrough in terms of analyzing molecular clouds in the interstellar medium.

Researchers, for the first time, are able "to analyze the 3D spatial structure and thicknesses of famous nearby star-forming regions." Allowing an "unprecedented insight into the origins and fates of molecular clouds in the interstellar medium", per this study. From the new mapping strategies, researchers have confirmed what was long theorized and now what is named as the Per-Tau shell. 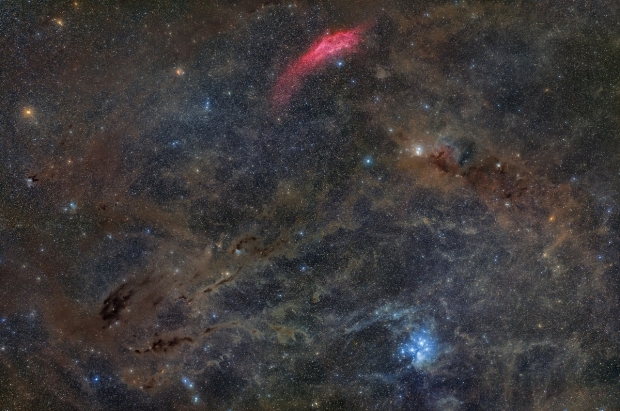 Additionally, Catherine Zucker, a postdoctoral researcher at the Center for Astrophysics, said, "This theory that star formation is triggered by the death of previous stars has been around for a very long time. It's been seen in simulations where people try to recreate conditions we see in the interstellar medium in the galaxy. But we have never actually seen it in observation because we didn't have the 3D spatial view that you can get in simulations until now."

Harvard astronomer and co-author on both of the studies, Alyssa Goodman, has created 3D renderings of the clouds that can be viewed here. If you are interested in reading more about this story, check out this link here.