If you've been holding off on buying an AMD Ryzen CPU with the new Zen 3-powered Ryzen 5000 series, then the motherboard you've been waiting for is here: EVGA's new super-enthusiast X570 DARK motherboard. 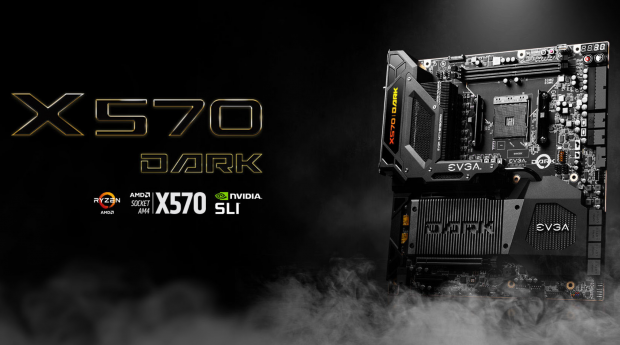 EVGA's new X570 DARK motherboard has its AMD AM4 socket rotated 270 degrees, and just 2 x DIMM slots which is the optimal for extreme overclocking (1 DIMM per channel). There are 2 x PCIe 4.0 x16 slots, and a single M.2 NVMe SSD. You won't need much on this board, but with 4TB+ capacities on super-fast PCIe 4.0 SSDs you can build quite the beast with the EVGA X570 DARK.

Enthusiasts will be buying the EVGA X570 DARK motherboard for its 17-phase Digital VRM, with the huge power delivery cooled by extensive finned heat sinks. The aluminum-finned heat sinks cool the VRMs and the PCH through a large copper heat pipe. The dual DIMM slots limit you to 64GB, but there's not many situations where you'd be buying a motherboard like this and wanting to put 128GB into this board.

The board has already been used to push some OC results to the edge, with DANOCP overclocking the AMD Ryzen 9 5950X processor pushed to 4.8GHz all-core, with an FLCK 2066MHz (1:1) on normal watercooling. We should see more with LN2 cooling in the future.