In less than two years, a German-made space telescope has managed to discover more than 3 million "new" objects. 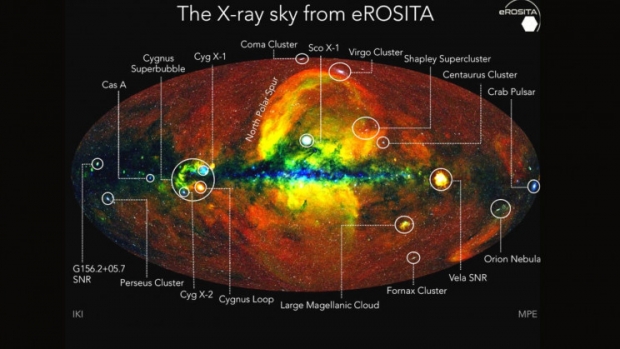 The space telescope is named eROSITA and is the very first X-ray telescope to be located in space. eROSITA is capable of imaging the entire sky, and due to it being an X-ray telescope, it can detect signals from objects that optical telescopes cannot see. For example, using eROSITA, researchers were able to construct the most detailed map of black hole and neutron star locations ever created.

Andrea Merloni, a senior scientist on the project, said, "For the first time, we have an X-ray telescope that can be used in very similar ways as the large field optical telescopes that we use today. With eROSITA, we cover the entire sky very efficiently and can study large-scale structures, such as the entire Milky Way."

Merloni goes on to explain, "X-ray telescopes so far have been able to look very deep into the center to observe the early universe. But it has always been very difficult to compile large populations [of neutron stars, black holes, and distant galaxy clusters] and create a large catalog that you could then use to study their cosmological evolution."

To get the most accurate theory of how the cosmos came to be, researchers will need to utilize various space telescopes designed to pick up different light wavelengths. Using all of the data accumulated from these projects, cosmologists will better understand celestial object evolution and our universe as a whole.