An old U.F.O. released by the Australian government has resurfaced online and is currently being used as a reference to compare to the recent U.F.O. report from the Pentagon. 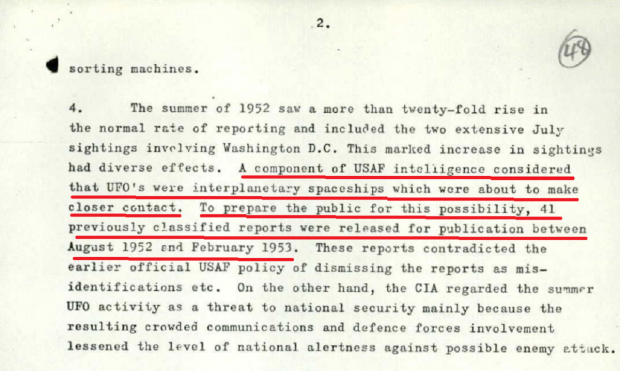 The report can be found on the National Archives of Australia website and is titled "Scientific Intelligence - General - Unidentified Flying Objects" with its contents ranging from 1957 - 1971. Reports have indicated that these documents were originally released back in 2008, and while definitely being dated, they are still being used as a reference point to compared against the recent U.F.O. report released by the Pentagon.

The 2008 report features chronological documentation on what is described as "U.S. Official Attitude To U.F.O.'s" (now referred to as Unidentified Aerial Phenomenon, or U.A.P.). Page 9 is the beginning of the section, and it outlines the events that took place between the late 1940s to mid 1950s. According to the report, U.F.O. investigations in the U.S. began in June 1947 under the project code name SIGN. The report outlines several events in the following years, but a few to especially note are:

A scientific panel chaired by H.P Robertson was convened by the Office of Scientific Intelligence of C.I.A. during mid-January 1953 for the purpose of recommending future action on the U.F.O. problem. Briefings were made both by C.I.A. and USAF. ATIC personnel showed the then classified two movie films of U.F.O.'s and the early results of statistical analysis of 3,200 reports.

Control of public awareness of the U.F.O. situation was tightened by the issuing of JANAP 146 in 1953 which prohibited service personnel from discussing U.F.O.'s by threatening defaulters with up to 10 years gaol and up to a $10,000 fine. When service personnel resigned or retired, however, it was possible to reveal USAF attitudes or opinions even if actual data was still restricted. 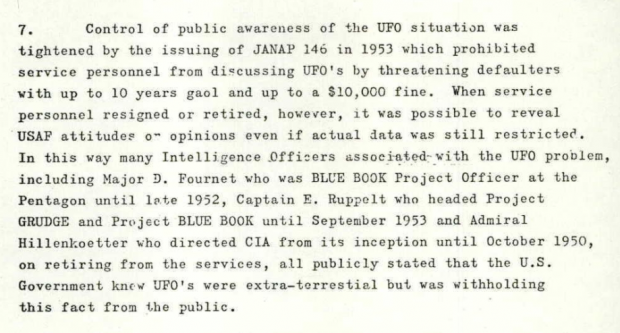 In this way many Intelligence Officers associated with the U.F.O. problem, inlcuding Majuor D. Fournet who was BLUE BOOK Porject Officer at the Pentagon until late 1952, Captain E. Rupplet who headed Project GRUDGE and Project BLUE BOOK until September 1953 and Admiral Hillenkoetter who directed C.I.A. from its inception until October 1950, on retiring from the services, all publicy stated that the U.S. Government knew U.F.O.'s were extra-terrestrial but was withholding this fact from the public.

Redditors are now comparing the quality of information that was recently released in the Pentagon report to the information in the 2008 report. Even after a quick comparison its clear that the recent Pentagon report is lacking information and that there is much more being covered up by the U.S. government under the appropriate reasoning of protecting "national security".

The Pentagon: A History